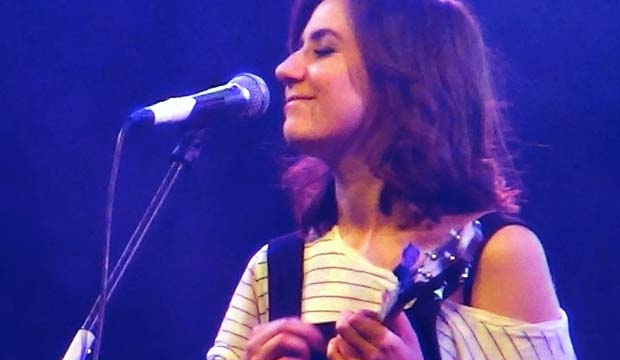 Dorothy Clarke, aka dodie, started her YouTube career in 2007.  From there she has skyrocketed into internet fame, and we went along to her Manchester performance of the You tour at Manchester Academy - a return to the city for the Youtuber, following her gig at Club Academy last year.

How to describe her? So freaking charming, if nothing else. One of the most endearing humans you can imagine. She spread the set between playing along on her ukulele, acoustic guitar & keyboard.  The audience was a delight- sobbing and laughing along, cheering and screaming her lyrics to her.  She paused, at the start of her set, to ask for help with her songs, anticipating a crowd wide sing-a-long but there was no need to ask; the crowd was already 100% on board before the close of 'One for the Road', an unreleased single from her YouTube channel.

The sell-out crowd was mostly teenage and pre-adolescent girls with a couple in their early-20s, but also had a few devoted boyfriends and parents mixed in- all of whom were dancing along by the end of the set. Such a demographic, so often wrongly made fun of and dismissed as part of the fan-girl generation, was beyond joyous to have a singer to relate to tonight.  'She', a single about queer romance in high-school, was a particular hit, with Dodie borrowing an LGBT flag from the audience & adorning her set with the bisexual pride colours behind her. It was an honest admission of her school day crushes and a, "Well, I, guess I'm queer then!"- and an accompanying roar from the crowd.

Her appeal largely comes from her starkly honest and catchy songs about the messiness and often awkward and painful experiences of becoming an adult.  Her songs relating to the uncertainty of mental illness, complicated relationships, and the struggles of young-adult life were refreshing; it struck a chord as something new, something fresh- and certainly something to watch out for.