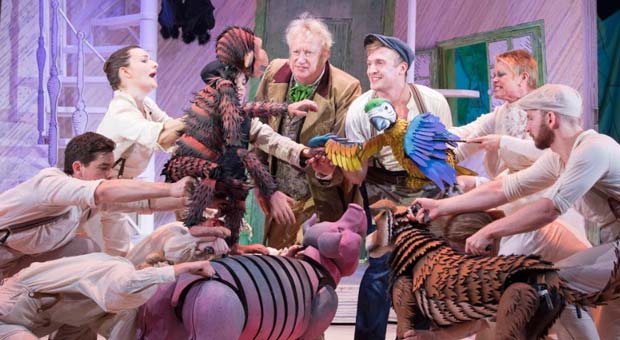 Doctor Doolittle at The Lowry

After the huge success of Elf last Christmas, The Lowry present Leslie Bricusse’s acclaimed family musical Doctor Dolittle - part of the 50th anniversary celebrations of the original film. Pre-dating Lion King, the original London stage production wowed audiences with its creative puppetry of animals large and small. Indeed, the show has lost none of that magic, with impressive storybook sets and stunning animal puppets from birds and rodents to the infamous Pushmi-Pullyu and Giant Pink Sea Snail.

Mark Williams is suitably bumblesome as Dolittle as he learns to talk to the animals (cue song!) with the help of his trusty sidekick Polynesia. Rex Harrison (as Dolittle) was known for an inability to sing, a trait not forgotten in this production. It works for Williams, but led to a shocking start to Act Two. Luckily this is pulled back by the beautiful voice of Mollie Melia-Redgrave (Emma Fairfax) and the impressive Patrick Sullivan (Matthew Mugg). The young actor playing Tommy Stubbins also impressed. Another production with a couple of Corrie favourites, this time we have Brian Capron doubling up as Albert Blossom and Straight Arrow, and Vicky Entwistle as Polynesia.

A flying ‘something’ seems to be de rigeur in big productions these days – last year Elf flew in Santa’s sleigh, before that we had Chitty Chitty Bang Bang. This year we have a moth carrying Dolittle back to his friends on the end of a metal arm; nothing hidden; no magic; a disappointing moment that should have wowed the audience.

A spectacular show to look at, but missing a much needed touch of Christmas magic.