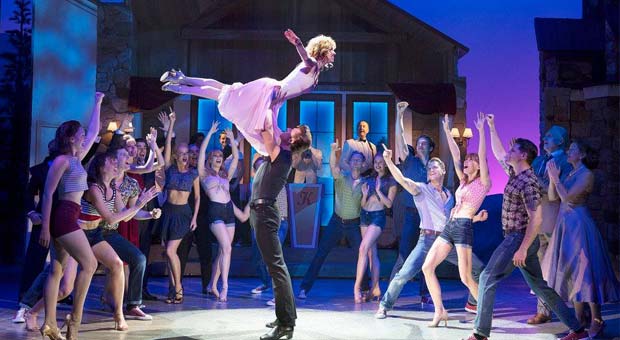 Last night we attended the theatre to be taken back to the summer of 1963. When it comes to putting Dirty Dancing on stage it is essential it is done right – the 1987 film is a beloved classic and has some iconic moments. Fortunately, the stage version that graced the Palace Theatre hit every note in just the right place. It was fun, it was steamy, and it was a total pleasure.

The cast were superb and what I think really helped to sell this performance is that the cast really looked like they were having fun. This is a job at the end of the day for the guys and girls on stage but the enthusiasm and the feeling of love the guys had for the material really came across. From the film everyone remembers the chemistry between ‘Baby’ (Jennifer Grey) and Johnny (Patrick Swayze) in the film and it’s essential that the two leads on stage replicated that energy and I’m happy to say that Kira Malou as Baby and Michael O’Reilly as Johnny more than lived up to expectations.

The cast without exception can dance, they can sing, and they can deliver a heartfelt performance. The smaller roles were all worthy of note and Lori Haley Fox delivered some great comedy moments as the bored Marjorie Houseman. The audience for the performance clearly got on board with the cast with cheers for some of those iconic lines and moments, whether it be ‘No one puts Baby in the corner’ or that lift at last dance of the season. Also thank god that Michael O’Reilly was cast in the role because he isn’t just a fine actor, he is fine in every other sense of the word – and I would take dancing lessons from his Johnny Castle!

I must admit it had been a long time since I’d seen the film so some of the underlying themes, I had forgotten, so it was nice to reminded of some of the darker elements that would have been prevalent in 1960s America. Whether it be back street abortions, the issues surrounding race at the time or that of class prejudice these are subtly and sensitively dealt with.

I wasn’t expecting to enjoy the show as much as I did but I’m going to honestly say ‘I had the time of my life’ watching this performance! The Palace Theatre once again lived up to the high standard that we’ve come to expect, and I hope the rest of Dirty Dancing’s run is as fun and high energy as last night – the cast and behind the scenes crew really deserve high praise for putting on a beautiful show.