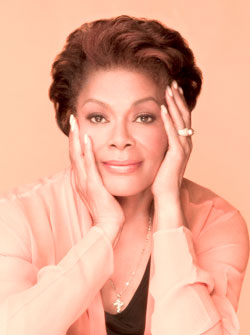 The term ‘legend’ is often overused these days, but it fittingly describes Ms Dionne Warwick, who in her 72nd year shows no signs of slowing down, particularly on the live circuit currently celebrating her career with the ‘50th Anniversary Tour’. Only Aretha Franklin has had more Billboard chart entries in terms of female artists. Sadly her cousin Whitney Houston will never have the chance to emulate her longevity.

Having been involved  again last week  in the Hunger Project (to commemorate World Hunger Day) at the Royal Albert Hall, it was almost cringe inducing to see Ms Warwick having to perform with the likes of Katie Melua and Joe McElderry, albeit for a good cause; so great to see she hasn’t invited any of these ‘friends’ here tonight.

We are treated to all the classics and more: Anyone Who Had a Heart, That’s What Friends Are For, Heartbreaker, San Jose, Alfie and her version of Say A Little Prayer. The band is fantastic and particularly comes alive during the Brazilian Jazz section. The crowd is appreciative and we lean on her every word. Unfortunately even in a fairly intimate venue, this crowd is sparse. We are also too polite and in awe of the great lady’s presence to point out that the delectable, silky vocals we are accustomed to, are not always hitting the spot and often the great band is somewhat drowning out the lyrics. Luckily we know nearly every word!

Maybe after 50 years in the industry, Ms Warwick doesn’t quite have the pulling power or the vocal punch but all things in context her charisma, her style and her great back catalogue will always be welcome. Bring on the 60th Anniversary Tour!