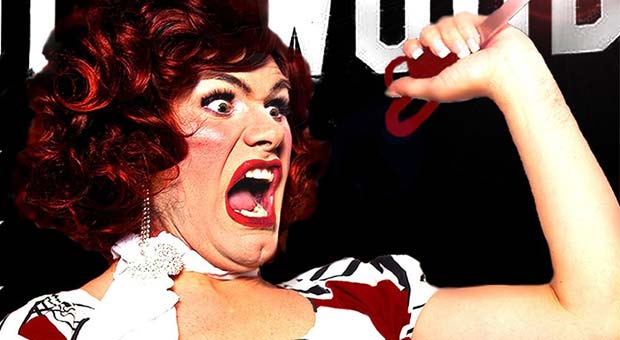 American Charles Busch, the writer of Die, Mommie, Die! Is well-known as a writer, actor, director and drag artist, having written and performed in over twenty five plays. Die, Mommie, Die! was first produced in 1999 and twenty years on doesn't feel like it has aged at all. Vertigo Theatre Productions first produced the play alongside one of Busch's other plays Psycho Beach Party in 2011, and are revisiting it now as their penultimate Manchester production.

It's 1967. Angela Arden is a faded film and music star, married to film producer Sol P Sussman, mother of two , Edith and Lance, and entertaining a younger lover Tony Parker. Sol is in dire financial straits and threatens Angela, so she plots her revenge. But all is not what it seems and there are many plot twists throughout.

Dale Vicker excels as Angela, the role written for Busch himself. Full of energy he relishes the camp drama queen nature of Angela and gives a stunning performance. Full of quirky expressions and dramatic flair he commands the stage, but retains enough belief in the character so that the final scene is full of pathos but not overdone. But it is his comic timing and physical comedy which is second to none.

He is ably supported by a predominantly excellent cast. Vertigo regular Anna Hiickling makes sex kitten Edith a rounded character and pulls off a superb performance. Benjamin Grey as the rather screwed up Lance is very expressive while Emma Morgan as the maid Bootsie shows off not only her phenomenal acting talent but her highly comedic side.

As ever, award wiinning Craig Hepworth directs with the skill and passion which makes him one of the best directors working in fringe theatre. A single but complex set works excellently and the lighitng, sound and visual fx (by Hepworth and Karl Burge) add to the overall high quality production.

Die. Mommie, Die! is not a fluffy lighthearted show, but a much more surreal dark comedy. However it is hilarious and thoroughly enjoyable to watch. The run at the King's Arms is pretty much sold out but there is also the chance to catch it in London in July. It is one of those shows where you need to do whatever you can to get a ticket. You won't regret it.