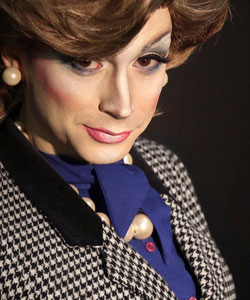 You’d be hard pushed to find anyone over a certain age who doesn’t know exactly where they were when news broke that Princess Diana had died. The magnitude of her death struck a chord so deep that a seemingly unrelenting period of national mourning ensued. As a result, it’s only natural that Dear Di would join the ranks of so many iconic figures in history to gain a good old myriad of conspiracy theories; is she really dead? Was it all an elaborate set-up? If you’re one of those types who swears they’ve seen the People’s Princess buying own-brand Frosties in Lidl, you’re in for a treat because Stephen Hornby’s Die Diana ponders that exact question.

The scene is set as a twee but shrewd aristocratic lady, a canny drag queen and a very angry young man all step out of the shadow’s of Hornby’s latest play to declare that they are Princess Diana. As each of them present their wildly colourful confessionals to the audience, we’re lead to wonder who, if any, are telling the truth.

It’s an intriguing premise, one which is certainly possible because of the enigmatic nature of Princess Diana; someone with whom her every move was reported and yet no one seems to know who she really was. She became to many, what they wanted her to be.

Aristocratic Princess Dee, our first Diana, played by Emily Hepworth, is a doe-eyed but seemingly necessarily manipulative Princess. We’ve all heard the whisperings that Diana played the dangerous game and this version certainly presents a compelling argument as to why Diana would be led to fake her own death. Hepworth artfully presents the right balance of warmth and humour, easily leading the audience to fall for her strangely believable tale.

Now we come to Die Anna. Now isn’t it a jolly thought that Princess Diana faked her own death and navigated her subsequent existence as a Princess Diana drag queen? Wonderfully funny touch from Hornby. You might be forgiven for thinking that this turn of the absurd is a play for laughs but Dan Wallace, aka Anna Phylactic, not only whips out of the sharpest of lines with perfect timing but delicately emanates the tragic sadness of Diana with aplomb.

Our final Diana is the darkest of them all. Dee, played by Ciaran Wilson is quite the surprise in his turn. A deliciously intimidating ball of anger, it’s intriguing to see him switch effortlessly between pre-eruption to a delicately vulnerable and desperately sad incarnation of Diana. The culminating reveal at the end clears any confusion which may be rattling in your head, but this doesn’t make Wilson’s performance any less enjoyable.

Wonderfully cast, Die Diana is an engaging and charming play with a delectable dose of dark humour. Sharply written by Stephen Hornby, it puts an intriguing and colourful spin on a tragic tale. Well worth a watch.