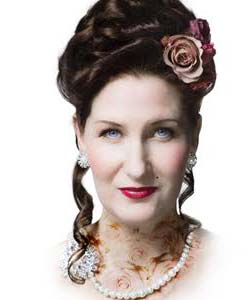 The last time we saw Opera North at the Lowry, they were bringing the curtain down in triumph with the final part of Wagner’s Ring Cycle, Gotterdammerung. Under the direction of Richard Farnes, the orchestra had never sounded finer. In this latest visit, Aleksandar Markovic (Opera North’s new music director) had some big shoes to fill. Choosing one of the most sophisticated and colourful orchestral operatic scores (Der Rosenkavilier) was a bold move and I am not sure it paid off. There were moments when the orchestra sounded a little hectic and raucous, as if they were still trying to establish a relationship with their leader. Consequently, the orchestra at times dominated the singers, who also seemed to lack the lushness and flow that the score requires.

Nevertheless, overall Opera North did not disappoint with the latest residency at The Lowry Theatre, Salford. From the opulence of Der Rosenkaviler (Strauss) to the grittiness of Billy Budd (Britten), mixed with the dark offerings of Il Tabarro (Puccini) combined with the company’s first production of Puccini’s only all-female opera (Suor Angelica). The only thing missing here would to have added Gianni Schicchi but perhaps we can hope that Il Trittico (the name given to the collection of three one-act operas), is on its way. Despite this, Anne Sophie Duprels was outstanding in the title role (Suor Angelica), and as she delivers her big moment, Senza Mamma, face down on the floor, she proves that among an impressive ensemble cast, there is simply ‘nun’ finer.

Similarly, the singing of Roderick Williams in the title-role of Billy Budd was a standout moment. Whilst the orchestra and unusual approach to staging seemed to lack the sense of excitement, the Opera North chorus did everything that is asked of them and it is refreshing to see them developed in such a way.

The collaboration between Opera North and The Lowry goes from strength to strength and allows opera fans to experience quality opera within the North West, long may this continue.