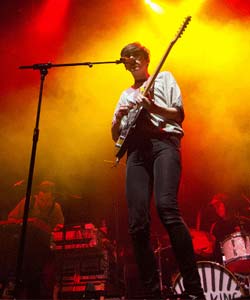 As part of a live tour he stopped by at The Albert Hall on Thursday and we were there to catch the gig.

Cage the Elephant at Albert Hall

Last night, Cage the Elephant were in raucous form, headling the Albert Hall in Manchester, with support from Declan McKenna and Spring King, and we went along for Canal Street Media to have a look;

Chatting to us before the gig, Declan told us he was nervous about the numbers at tonight's show, considering the early time of his slot.  He needn't have been.  It's rare you'll get such an enthusiastic crowd at 7:30 on a Thursday night, but they were there, on each others shoulders, singing along to the set.

There was some great dancing with his guitarist, and lots of cat-and-mousing with security as he vaulted from the stage and tried to high-five the crowd along the barrier.  He was longlisted recently for BBC's Sound of 2017, and, if he's amassed this kind of following so soon into the year, we predict big things from the Hartfordshire lad.  With his cheeky grin, mix of folk and indie pop, coupled with the intelligent wit of his political lyrics - Brazil and Paracetamol touching on FIFA scandals and transgender rights respectively - we're expecting big things, and very much looking forward to his debut album in May.

Second on stage were Spring King, a proper, Manchester-born explosion of noise.  Tipped recently as "the next big thing" - having appeared on Jools Holland and featured by Zane Lowe, they proved their worth.

They've grown up quick; four years into their existence they've gone from underground Manchester clubs to Kendal Calling and onto South By South West, and their gritty and distorted riffs and licks were a real post-punk racket; a racket with endless energy, and some real good bass-face gurns.

If we thought we'd seen energetic performances from the support, we were well and truly unprepared for Cage the Elephant.  Frontman Matt Shultz was like an eel with a mic.  I don't think we've seen anyone with that much energy, ever- but then we have lived in the library like slugs for the past month.

There was jumping and dancing and climbing on top of speakers, and wiping his sweat off with the setlist and launching it off into the crowd (much to some super fans absolute delight).  Their set spanned all four albums, a huge set, and we were knackered by the end just watching the long limbed leaping frontman Shultz bend like some kind of elastic Mick Jagger.  The band said they loved Manchester, and we loved 'em back - they even got a rousing chorus of "Manchester, la la la," - and we got a nice improv accompaniment in response to the screams from Jared Champion on drums.

An all round belter of a show, incredible support artists, a brilliant headliner, and the kind of crowd you bet artists can only dream of.