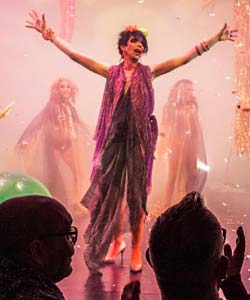 In Diamond, named so to mark 60 years following the Wolfenden Report, a recommendation that homosexual activity should no longer be a criminal offence, David transcended through the ages, telling his semi autobiographical, semi party-political and full-on divine story. An onslaught of song, dance and dramatic monologue ensued.

From his humble beginnings working as a BHS cashier in Blackpool, to his evolution to becoming the UK’s avant garde oligarch, in his usual alt-drag / alt-reality style, David sang, danced and story told his way through the ages.

In this perfectly put together show, David shared his stage with guest stars, London’s brilliantly bonkers The Lipsinkers and 4 dancers from Manchester’s House of Ghetto who brought us camp vogue realness.

A born performer David knows how to charm his audience, and it wouldn't be a show without him venturing into the crowd and getting to know his fans in his own unique way.

David’s kitchen sink reality meets abstract avant garde comedy is fully alive in every way and Diamond did not disappoint.

A triumph from one of Manchester’s finest, well done David!

More about the festival here.