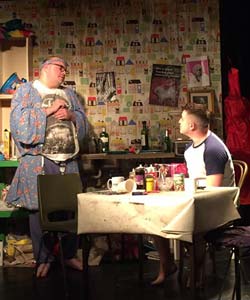 A crisis in the life of Brain, a failed drag queen whose Thatcher-inpsired act died when the Iron Lady was toppled nearly three decades ago, provides the start - and the tearful finish - to David Thame's clever comedy Dancing (Three Minute Theatre, Afflecks Arcade, Oldham Street, 16-19 March 2017).

Betty the dog is the play's deus ex machina (canis ex machina?). We're told in the first scene that Betty, anxious and incontinent, fouls the floor whenever Brian is out of the house. In the last scene Harry, coming home late from his first big professional outing, inevitably lands in the shit, as does Brian when an outraged Harry decides to leave his lodgings, and report Brian to the accommodation agency. Bradley Kerr (Brian) is barely off the stage and handles a vast baroque part with energy and skill. Brian's transition from silly queen to sad but proud victim of his own good nature is touchingly handled by Kerr. Stephen Costello (Harry) plays the driven Harry with glittery-eyed conviction - and delivers some lovely dance moves.

Phil Clift (Triga) does the cheeky scally proud, to this Manchester audience's obvious delight. The audience laughed from the beginning to the end of Dancing - and it was a sad end as the plot gently twists to deliver its tragic message. As the door closes after Harry, poor Brian, trapped in the web of his own good intentions and crazy dreams, waltzes off the stage alone. Gina Frost (director) deftly handles her well-disciplined and thoughtful cast to ensure that a the romp never becomes a riot, and that the downbeat conclusion flows naturally from the upbeat start.

For those with long memories the play was reminiscent of Steptoe & Son. In both situations, an older man was locked into living in mutual squalor with a younger one. In this play, the arrival of a third person wasn’t enough to break the mold, just as Harry never managed to break away from his father no matter how hard he tried. Neither of them could have survived without the other, and so it was in Dancing.

The set - a recreation of Brian's pestilential kitchen - was a masterpiece of ruined tat that ought to be in an art gallery, where it would put Tracy Emin's work in the shade.

Strong performances  and huge fun all round.