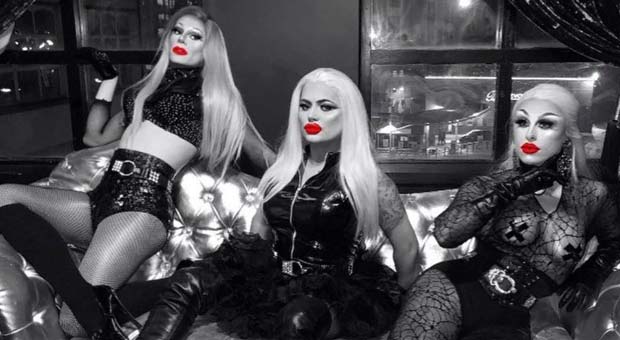 When RuPaul's Drag Race launched in the UK no one could have expected it to launch a single from one of the episodes in the UK top 40. The Frock Destroyers consisting of Divina De Campo, Blu Hydrangea and Baga Chipz with their version of Break Up has taken the UK by storm and it is no surprise that Klub Kidz snatched them up for a tour.

I can honestly say there was no better way to spend a Monday evening. It was one hell of a show and it is no wonder it is a sell out in all the venues they're visiting. The first half of the show start with a set from each of the 3 drag queens. They're all brilliant and the vocal range of Divina De Campo is incredible. The second half of the show is what we'd all been waiting for, the drag queen collaboration that won them the Ru Peter badge. It was absolutely worth the wait and it was so good they did it twice.

The great thing about the UK queens is you can really feel the love they have for the crowd. They engaged with the crowd and the crowd loved them back. The atmosphere was honestly electric and despite the Frock Destroyers only having one song (at the moment) no one cared. As someone who has gone to see the RuPaul queens perform in Manchester before this has to be one of the most personal despite the huge numbers that attended.

I've never attended a Klub Kidz show before and it was a well organised affair. It was well put together and Cruz as the venue worked well for the event. In all honesty they probably needed somewhere even bigger because I can imagine the Frock Destroyers selling out over and over again. Roll on the next time!