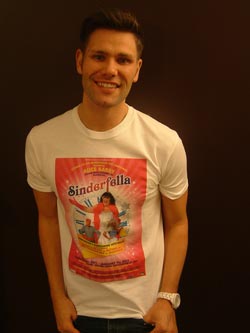 This time we interview Dale Vickers following the announcement that 'Die Mommie Die' will be on stage again at Sasha's Hotel Manchester.

Vertigo Theatre Productions are one of Manchester's 'premiere fringe theatre company's' with strong links to the city's gay community premiering all their new plays at Taurus on Canal Street.

This year the company had the great honour of producing 2 UK premiere productions of the Off Broadway smash hit plays 'Psycho Beach Party' and 'Die, Mommie, Die' by Tony Nominated Charles Busch.

After a sold out 2 week run at Taurus 'Die, Mommie, Die!' is back as part of Manchester Pride 2011 at Sachas Hotel Ballroom. Dale Vicker leads the 60s homage/parody play as Angela Arden, a former singing sensation with murder on her mind.

One of Vertigo's rising stars Vicker has enjoyed success in the city with his portrayal of original roles even having the role of James in Craig Hepworth's award nominated play OUT! specifically written for him.

Dale sat down for an exclusive interview about the crazy going's on at Die, Mommie, Die!

1) For those who were crazy enough to miss the original UK Premiere of Die, Mommie, Die! this year can you tell people what the show is about?
It's the 1960s and one time singing sensation Angela Arden plans to leave her husband for her younger Lover Tony Parker. Everything seems so easy until her husband Sol Sussman discovers the truth! Her only way out is MURDER! Unfortunately for her, her children also have murder on their mind especially when they dig a little deeper into their mothers past... The play is a very funny homage/parody of those great 50s and 60s melodrama movies like Dead Ringer and Whatever Happened to Baby Jane.

2) Charles Busch is such a legend on and off Broadway because of the fantastic plays he's written and the leading female roles he's played including Angela Arden in Die, Mommie, Die! How does it feel stepping in to those stilettos?
It's both an honour and privilege to play Angela, a character Charles himself made famous by playing for so long and so god damn well off Broadway and in the award winning film version! For these reasons alone I wanted to ensure I did the character justice by studying how Charles brought Angela originally to life and also adding my own humour and personal traits to the role. I was very nervous at the outset with relation to what Charles would make of my characterisation of Miss Arden herself and only hope he is pleased with my rendition.

3) Each scene your character is in you have another costume change in to another stunning period dress, how is it dealing with all those changes off stage?
Ha ha.. The hardest thing is the time between scenes! So on stage Angela is mysterious and calm and the moment she leaves she is a woman possessed! While pearls, rings and couture frocks are flying around backstage, even Charles himself must have missed a cue or two because of the quick changes. I am very lucky to have such a supportive cast who help me master these rapid changes... If we make it to London however our Director has promised me a wardrobe mistress/dresser.

4) You have a great cast around you for this show, how has it being getting to work with them?
Amazing! The only cast member I have worked with before is Adele Stanhope who is such a talented actress and plays my daughter. The rest of the cast are all new to Vertigo which is extremely daunting when you have to don a dress every rehearsal and basically make a huge fool of yourself. Luckily for me we have been so privileged to find a group of actors who have all brought something unique to the production and taught me a lot.

5) The Taurus run was such a huge sell out success, is it exciting getting to do this again, and what are you looking forward to the most?
When we took our final bows on the closing night at Taurus I kind of knew that wouldn't be the end of Die Mommie Die. I can honestly say that playing this role is exhausting, stressful at times and I go home each night with cuts and grazes in places a lady shouldn't have!.. but I love the atmosphere and audience reaction so much that sometimes I think I never want to play another role again. I am looking forward to performing at Sachas Ballroom as it's such a big venue and we get the chance to perform in front of a LOT of people. Charles however has developed such a fantastic script with so many 'one liners' that have become almost iconic for anyone who has seen the play or watched the film, its these lines and the manor with which they are delivered to the audience that I cannot wait to perform again.

6) It takes around an hour to transform you in to Angela Arden, does the process help you get in to character?
I must admit, it isn't until the wig is on the head and the shoes are on that the posture begins to change, the way I speak and look at people (judge them) begins to alter and Angela Arden begins to come to life.

7) The show is a homage/parody of those wonderful melodramatic films of the 50s and 60s that starred people like Lana Turner, Joan Crawford and the awesome Bette Davies, what kind of research did you do?
I am a huge fan of films from that era such as 'Whatever Happened to Baby Jane' and much later 'Mommie Dearest' so I had a good idea on the genre and the parody that Charles set out to recreate. These women were the movie icons of their time and they possessed iconic stature, beauty and perhaps more importantly characteristics. Our Director Craig Hepworth who is also a huge fan of those movies and actresses encouraged me to watch films such as 'Dead Ringer' which is the closest film reference to Die Mommie Die which helped incredibly. I spent a lot of time also studying Charles's performance in the movie and Broadway performances to throw in a few homage's to Charles himself.

8) Your acting career really started with Vertigo in productions like 'M', Rage and the award nominated OUT! and you are also starring in the upcoming Last Dance in November. What is it the draws you to Vertigo?
Am I?? I hope my agent negotiated a good fee... (hee hee) I loved to act as a child and spent many years at Oldham Theatre Workshop. As I got older though, like many teens and young adults it became less of a priority. I started my own business in 1999 and hence never had any spare time. About three years ago I went to watch my good friend Michael Gates in Vertigos production of the 1980's smash 'Breakfast Club' and loved it! I asked if I could be considered for the next production (they gave me a supporting role pffffft!) and the rest is history. I love working with Vertigo Theatre Productions as they support you, nurture new talent and more than anything have become not only cast members but true friends.

9) So why should people come and see Die, Mommie, Die! at Sachas Hotel Ballroom?
This is easy! The whole production is fun! It's incredibly fun to star in and more importantly it's a fun production to watch and experience. The feedback from the original UK Premier by us back in March was wonderful and the early ticket sales for this next production so far reflect this! Finally we are very proud this year to be part of the Fringe festival of Manchester Pride 2011. Manchester Pride is a charity that raises vital money for many organisations within our community including The George House Trust who support research and support for those living with HIV...

So I hope to see you all at Sachas Ballroom for what promises to be the highlight of the fringe festival and probably the campest night of your life..."You must!.. It's your duty"

Check out the trailer for Die, Mommie, Die! with footage from the original UK Premiere by Vertigo at Taurus...