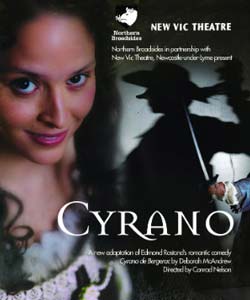 Cyrano de Bergerac at The Lowry

In a new adaptation of Edmond Rostand’s 1897 play, Northern Broadsides, in association with the New Vic Theatre, bring the classic tale of Cyrano de Bergerac to the Lowry’s Quays Theatre.

Set in the golden age of musketeers, Cyrano tells the tale of a man with a sharp wit, great sword skills, and (in his eyes) the ugliness of a large protuberance that he blames for a lack of success in the field of love. Deborah McAndrew’s script continues Rostand’s use of rhyming couplets, but does not rely on the formula, providing pertinent breaks to the rhythm and rhyme.

Christian Edwards confidently plays a youthful Cyrano, who pens the words that the woman of his heart - Roxanne (Sharon Singh) - falls in love with; Christian (Adam Barlow) is the word-shy face that she believes she loves. They are supported by a talented cast of minstrels, including great comic timing from Francesca Mills.

The staging reminded me of one of Pollock’s toy theatres, sitting perfectly in the intimacy of the Quays Theatre and, whilst this touring production offers moments that shine and the original music provides a suitably Baroque atmosphere, the pace is slow and never fully ignites the stage. Cyrano may be large of nose but this tale is longer…much longer.