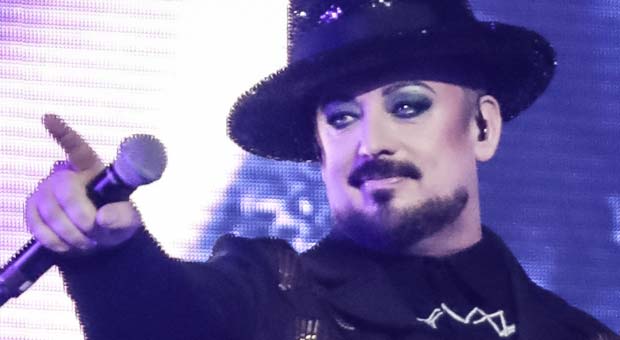 Much anticipated this tour by Boy George as the last one was cancelled. Plenty of fans, from older and very young, dressed in the distinctive Boy George style from the start of it all in the 80's, which added to the atmosphere prior to the gig starting.

Security clearance was quick and easy, pleasant and helpful staff available at every turn.

Tom Bailey was first on stage. Previously of the Thompson Twins and has recently released a solo album. Supported by an all female band who moved easily between different instruments and provided great vocals too. Tom sang, played guitar, electric piano and electric drums. He started with a couple of well known Thompson Twins songs then moved onto more recent compositions, including from the recently released album. His voice has not changed at all, very distinctive and the audience sang along from the start, loving the familiar and appreciating the new. The sound created by the band was great, with lots of electronic input and great graphics projected at the back of the stage, plus an atmospheric light show which at times was projected all round the the stadium. Plenty of songs everyone recognised and Tom and his band clearly enjoyed interacting with the audience. A great start to the evening.

Belinda Carlisle on next, a much more understated performance, nonetheless very entertaining. She had a great band with her, some fantastic guitar solos in a couple of the songs. She looks exactly the same! Can't believe it's been 30 years. Dressed all in black, almost a ballet type outfit on, she was very graceful and light, moving easily round the stage, constantly dancing and enjoying the music her band played when she wasn't singing. Her voice is exactly the same and all the songs were familiar hits plus some loved album tracks ( including a couple of her favourites ) Audience loved it, singing and dancing enthusiastically from start to end. It was great to hear her live and I had forgotten how many hits she had back in the day. Wonderful performance.

Boy George and Culture Club, the main event. The band was made up of original and new members 2 guitarists, 2 percussion/keyboard and a number of backing singers who were phenomenal ( one of them got the biggest cheer of the night when she was introduced at the end !! )

George was dressed up to the nines in his usual flamboyant style, with a huge hat ( of course ) and the screaming was deafening when he arrived on stage at the top of a staircase. There is no doubt that George has devoted fans and the arena was full of them. Lots of love in the room!

He is cheeky and engaging and talked in between each song, involving the audience, which they loved. His singing voice was quite husky at times, but still unmistakably Boy George. Again, so many well remembered hits to sing along to. An extra bonus was a cover of David Bowie's 'Let's Dance' , followed by a T Rex cover 'Get it On' too, very pleasant surprise and both really well done.

Great quality performance, everyone on stage giving it everything they had. Again the girls who sang backing were superb. I was completely hoarse at the end from so much singing along.

Great clear screen behind the stage, giving anyone far away a crystal clear view of those on stage, plus very cool graphics and fabulous lighting changes.

The quality of sound reproduction from all 3 acts was superb, hats off to the technical crew at the arena. No earplugs needed!

Really great night, everyone smiling and singing on the way home.