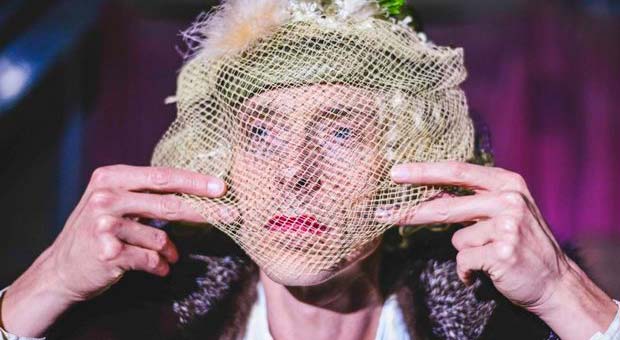 Crossings, written by Deirdre Kinahan, is inspired by true instances of cross dressing in the military. A co-production between Pentabus and New Perspectives, Crossings toured in 2018, and is available to watch online for free until July 3rd.

The narrative is essentially split into two parts: the first part takes place in 1919, when the slightly stuffy, solitary Margaret meets the unencumbered Grace, a cross-dressing soldier who met and fell in love with Margaret’s brother William during the war; the second part is a contemporary conversation between Margaret’s grandson Sean and a Sarajevo-born care worker named Mirjana who escaped to the English countryside during the seige of her native city in the ‘90s.

The more engaging first part begins with Grace steadily revealing William’s wartime secrets to Margaret, proving that we may never truly know the people we love. Besides William being in a relationship with Grace, the two of them also performed in a frontline theatre troupe called the Immoral Balmorals. Building the morale of his fellow soldiers while also fighting alongside them made William a star; yet Margaret never suspected her brother was theatrical, nevermind courageous.

Though initially uncomfortable and abrasive, Margaret slowly opens up to Grace; they learn about each other’s lives and discuss themes such as homosexuality and women’s rights post-WWI before coming to an unexpected (though not wholly unlikely) arrangement.

These themes are easily relatable to our lives today, and Crossings is able to explore them in a caring and respectful way that succeeds in warming the heart - though perhaps it is too idealistic to be hard-hitting.

The premise of the slightly darker second part is Sean’s search for a suitable care company to help his mother live in her house. Yet Sean’s mother, understandably apprehensive, has absconded; so Sean and their morning appointment Mirjana find themselves having a sometimes awkward, always meandering chat about their lives. Their relationship grows, feeling slightly forced at times, using a number of unlikely coincidences to keep the conversation flowing - for example: Mirjana teaches dance in the village hall where Margaret and Grace met, and Sean dances competitively.

This part focuses less on theme and more on character, the details of their lives and experiences; but unfortunately these characters are slightly less interesting than those we got to know earlier, and so the pace seems to fizzle out. Also, the links between this act and the first are thin, which means it doesn’t feel like a completely successful continuation in story or theme.

Overall this is a touching slow-burner about the personal side of war and injustice, and despite its minor flaws it is still emotionally engaging. Victoria Brazier and Will O’Connell display commendable performances in both parts, and I would consider the musical medley that acts as an interlude to be the standout moment of the piece. Crossings highlights how love shines through war - how basic human connections can overcome all the horrors of the world - and at a time like this, that idea comes as a welcome relief.