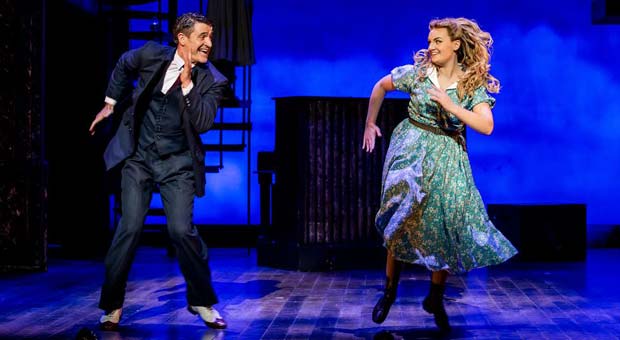 Crazy for you at The Opera House

Our news media is dominated by Brexit, terrorism, Trump and the economy, and bar a recent Royal engagement, much of this makes depressing television and reading. Even Crazy For You features songs from other musicals and was written in the 1990's, the messages and values within it are perfect for today. It is so deliriously feelgood, that you will leave the theatre on air, as it pushes all of your happy buttons.

The plot could be written on the back of a theatre ticket, but all you need to know is that a features a run down theatre and a show designed to stop it from being closed down. Cue mistaken identity, crazy situations, gender battles and true love. All of this is punctuated by some of the most glorious, instantly recognisable songs, including; I Got Rhythm and They Can't Take That Away From Me. The marvellous melodies and satisfying score sweeps you off your feet, as this is Ira and George Gershwin at their very best.

Nathan M Wright's choreography is simply stunning, as it provides the piece with so much energy, that it reaches the back of the theatre. Having Tom Chambers along for the ride, as Booby Child is canny casting, following his successful stint on Strictly. He also has crazily good comic timing, and he is more than matched by the brilliant Charlotte Wakefield, as the feisty and ferociously funny, Poly Baker. Her vocals are silky smooth, but there is a not one weak link here, as the entire cast are excellent.

Diego Pitarch's set design is simple but incredibly effective and Paul Hart's direction is pacey and he really accentuates the beautiful ease, in which these characters interact with each other.

In a world of musicals inspired by movies, and sometimes lacking the emotion required to carry you through, Crazy For You stands out, because it epitomises the word classic, and delivers on every level.

Crazy For You is at the Manchester Opera House until Sat, 2 December.