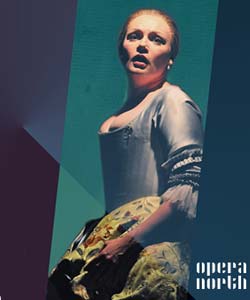 It’s amazing in this reality obsessed world that the concept explored within Mozart’s Cosi Fan Tutte has never been explored on TV. As Don Alfonso (William Dazeley) bets his two young friends Guglielmo (Gavin Ring) and Ferrando (Nicholas Watts) that their lovers Dorabella (Helen Sherman) and Fiordiligi (Marie Flavin) will prove unfaithful if put to the test. The claustrophobic staging, set within a box resembling the inside of a 19th century box camera, adds to the social scientific experiment explored within the libretto. For ‘opera virgins’ this would a great choice due to its emotion, humanity and minor comedy moments being well handled by the orchestra and cast.

Ring’s rich and assertive voice compliments the sensitive tone of Watts. Sharman’s voice is like velvet shown through the beautifully performed trio ‘Soave sia il vento’ (sweet is the wind), but it is Elle Laugharne that dominates the first half and steals the show at times with her exceptional performance of the coquettish Despina. However, it is the second half that provides a gripping and shiver-inducing moment, with the emotional intensity of Flavin’s performance, indicating that her Opera North debut will surely be followed up by further appearances in future seasons. Her glittering upper register is shown perfectly during her performance of the Act 2 Aria ‘Per pieta’ (Dearest Love).

A second performance of Cosi Fan Tutte can be seen on Friday at Salford’s Lowry Theatre.