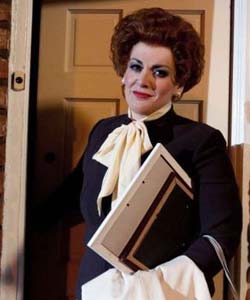 Coronation Street has been in the lives of most people's living rooms for 50 years. 'Street of Dreams' the musical version, of the iconic show premiered on Wednesday the 9th May at Manchester Arena, before embarking on a small tour.

Imagine a mixture of traditional Panto, throw in some Blood Brothers and a hint of Les Miserable. Should provide quite an evening you would think? Sadly, not for all but I am sure that the stalwart aficionados in the audience loved it. A packed Arena, although certainly not a sell out, sat ready and waiting. On stage was an impressive set, not unsurprisingly of Coronation Street, complete with an old red telephone box.

Then the show commenced. We were taken on a journey from December 1960 to almost the present day. Memorable characters were highlighted from the illustrious archives. Our guides for this journey were Paul O'Grady and as the 'Angel of Death', Katy Cavanagh, who is best known for playing Julie Carp in The Street.

A strong ensemble cast of actors and dancers worked hard throughout the performance to overcome some obstacles of space (the set being very long and thin as one of our fellow audience members remarked) and at times some of the material. Several musical highlights included the very impressive Jodi Prenger and Kym Marsh both portraying Elsie Tanner in a memorable duet. Indeed. the ladies on the whole, stole the night with some very strong vocal performances and solid stage presence. The score was melodious throughout and contained several moments that really got the crowd going.

We saw Martha Longhurst, Hilda and Stan. The feuding Tanners and Barlows along with glimpses of Curly Watts and Raquel. Then, more up to date, we had Becky and Steve. The dramatic Gayle and Richard car crash. Along the way, this production guided us across the decades with an original score by Trisha Ward.

The 'Gay scene' that revolved, of course, around the character Sean Scully, was cringingly obvious and stereotypical. I imagine that many of the LGBT audience squirmed uncomfortably in their seats. One of the Drag Queens in the scene actually said 'and I am a fairy', The ensuing silence spoke volumes.

Russell Watson joined the cast for the penultimate number. This certainly excited members of the audience. The final number was undoubtedly one of the musical highlights and sent us all out into 'Corrie like' damp Manchester/Salford evening.