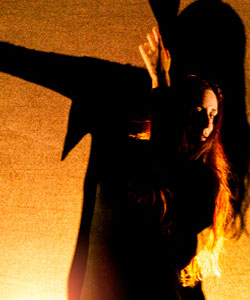 This year marks the 20th year of the collaboration between choreographer Russell Maliphant and lighting designer Michael Hulls. Together, they have developed a unique and unparalleled language between light and movement that is revered the world over.

We were there to see the performance at The Lowry.

Well rehearsed work always makes great art look effortless and there was no exception last evening at The Lowry.

With a collabortion lasting 20 years, Russell Maliphant and Michael Hulls gave us a trio of pieces each drawing on all of their great experiences working together.

The piece was full of innovation and complexity and was, of course, stunningly lit and turned out to be the favourite of not only ourselves, but it seemed many others in the audience.

There was also an under current of Homo eroticism when Nathan and Adam danced together.Was it really planned?Was it just wishful thinking from a couple of over 50's Gay men.Your reviewers.

Whether intended or otherwise, they interacted with tremendous style and grace and were tasteful throughout.

After a short break, we were then presented Both, and.

Featuring soloist Dana Fouras and 15 minutes in duration, this piece featured back lighting,a semi-diaphanous screen and a superb dancer.This combination gave the impression of 2 and at one stage 3 dancers performing in silhouette, instead of the solo Ms Fouras.

Personally, i would have preferred to have watched Dana dance without the screen and the clever theatrics,but the cleverness of her solo won through in the end.

Another short break was followed by our final treat, Piece No43.

Involving all the 5 dancers, the others now joined by Carys Staton, this final number built slowly in its force until the final lightning scene, exploded in a crescendo of Music, Light and Dance.

Again, the most powerful section being when the two male dancers interacted with feather-like precision.This apart, the ensemble worked hard together and audience responded accordingly.

Notable too were the wonderful costumes by Stevie Stewart.

For news about future performances at The Lowry, please click the link above.