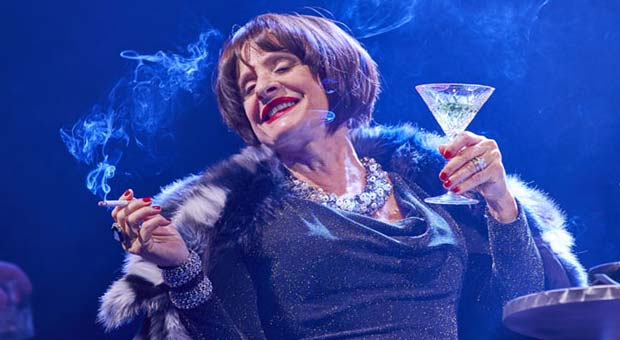 Company at the Gielgud Theatre

As a long time fan of Stephen Sondheim I was thrilled to be invited to review the current London production of Company.  Having been fortunate enough to see Patti LuPone in the 1993 production of Sunset Boulevard I was not disappointed to see her playing Joanne in this production.

It is a very welcome revival of a classic 1970s Stephen Sondheim musical. Having the approval of the composer/lyricist, has an update which brings it well into the 21st century. Bobby is a no longer a rather diffident 35 year old bachelor but an independent and attractive 35 year old career woman called Bobbie.  Marianne Elliott rightly persuaded Sondheim that a 35 year old single woman is more likely to be desperate to find a permanent mate than a man of a similar age; society’s judgement and the biological clock makes that very clear! No longer are all her couple friends heterosexual marrieds; some are in co-habiting partnerships and one couple is gay.  These two changes have catapulted the musical from being a rather dated period piece into a currently relevant masterpiece. However, the musical’s theme remains eternal – the stresses of finding lasting love in your 30s, while living in an urban environment do not get easier.

The songs are without exception terrific and they are, despite what many critics say about Sondheim’s compositions, very hummable.  The lyrics are the sharpest and yet most sensitive you would hear in any musical. I loved the re-introduction of the ‘lost’ song ‘Marry Me a Little’ at the end of the first act.  This provides a half way philosophy for Bobbie before she finally comes to her revelation at the end of the show that she needs to reach out, open up and take the plunge.  This she does with perfection in the show’s closing number ‘Being Alive’.

George Furth’s book is sophisticated and witty and surprisingly strong for a non-linear text. The ensemble acting is first class. Although at times Rosalie Craig’s performance seems rather uninvolving and lacking in warmth.  One suspects that she may be playing it exactly that way because those qualities explain why she is on her own at the age of 35. Patty Lu Pone gives a powerhouse performance of ‘Ladies Who Lunch’, being both simultaneously bitchy and vulnerable. The set, consisting of a series of illuminated box rooms, captures very convincingly Bobbie navigating the maze of her life, as she exits one door and enters another like ‘Alice in Wonderland’.  Two minor carps.  Changing the gender and sexuality of some of the characters requires changes to some of the lyrics which renders some of them not as punchy as their originals.  In the Andy and Paul gay wedding scene ‘boy joined to boy’ just does not have the sting of the original ‘husband yoked to wife’ for Amy and Paul’s 1970s wedding. Two of the tableaux (the married ju-jitsu scene and the gay wedding scene) are too long, drawn out and repetitive and eventually descend into hysteria.  Shaving 5 minutes of each of those would have tightened the production.

The icing on the theatrical cake was the after show Q&A with Rosalie Craig and Patti LuPone putting the whole performance into perspective.   All in all, a great production from a great composer/lyricist. It works!