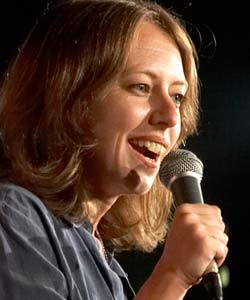 Queer Contact is well established in the LGBT calendar these days. Now in its 8th year the festival celebrates lesbian, gay, bisexual and transgender arts as a part of LGBT month. Over the 12 day festival there's plenty to see - solo shows, theatre, cabaret, poetry, debate and comedy including this showcase of stand up.

The (quite literally) glittering talent that is Jonathan Mayor was due to compere but illness had claimed him so Kerry Leigh stepped in. Admirably sporting sequins in Mayor's honour, Leigh comperes regularly Laughing Cows all women comedy nights run by herself and her wife Hazel O'Keefe's company Dulcet Sounds. The experience shows, she hosts with as much warmth as she has wit, which is plenty; and with just a touch of the absurd – cheese impersonations anyone?

First up on the bill was Rosie Wilby. Over the past few years musician Wilby has transformed herself into a comedian with a deceptively laid back demeanour. She performs with great dry humour where the tidy punchline sneaks up on you, the slow build up adding to the amusement. She's performed many a solo show about love, both the science of it and the lack of it in her life but here she's moved in with her girlfriend - and the cat – and so Wilby inadvertently but amusingly begins the running joke of the evening about lesbians and their cat co-habitees (let's face it, you can't 'own' a cat).

Also musically inspired is Ruth E Cockburn whose set culminates in a saucy song about sex phone lines. You'll be unsurprised to learn then that hers is a gloriously cheeky persona. A routine on the pitfalls of sending a fine art graduate supply teacher to teach 14 year olds sex education is close to the bone, a little below the belt and other such proverbials as well as rib tickling. She also leaves you with an extremely vivid mental image that means you won't look at a Marigold glove in quite the same way again.

David Morgan became the 'token' gay man on the bill as Tom Allen too had had to cancel. A fine job he did too, his chatty character makes it no surprise that he has clocked up a fair few presenting jobs in his career so far. Modern life is explored including the perils of explaining to his mum what an aubergine means these days in emoji world. Towards the end of his set he pauses for banter with the front row after they good naturedly insult his hair revealing a hint of a mischievous edge when dealing with hecklers and leaving us intrigued.

After the break was Bethany Black who, after being on the comedy circuit for a decade, had a pretty incredible year last year. She was cast as the first transgender person to play a transgender character in Russell T Davies' 'Banana' and 'Cucumber' and if she thought it couldn't get any better than that, the Whovian landed herself a role in Doctor Who. The stand up is still going strong too, her experience with those more tricky beered up weekend crowds shows really shows these days, hers is a sharp, snappy set that doesn't drop a beat. She also has a cat.

Completing the trio of those with cat lodgers, headliner Suzi Ruffell is a tour de force of an act tightly written routines are animated with mimicked voices and peppered with exaggerated facial expressions. She conjures an evocative recreation of her working class parents where Dad writes in capitals and mum has a fondness for animal print. It's a self deprecating set centring on those embarrassing situations where Ruffell is somewhat out of her depth the result is the creation of endearing warm stand up persona to round off the evening. And a killer funny one too.