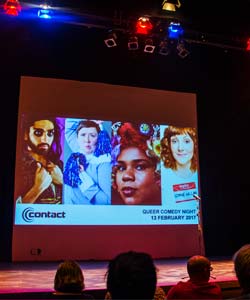 Each year queer performances and comedians come together for an epic night of stand-up comedy at Contact Theatre and this year was no different from any other.

First up the dazzling host Jonathan Mayor took to the stage shining from head to toe in all of his beautiful glory with funny phrases and stories that would make anyone laugh out loud. Interacting with the audience and getting the entire theatre to move down and closer towards him brought everyone together as one as it should be within our community. Jonathan continued to talk to the audience and came across a gay couple with the touching yet hilarious story of how they met at Bible Studies while reaching for the same Bible.

Next up was Sophie Willan (Magners New Act of the Year 2015, On Record) who bounded onto the stage with a strong Northern Accent. Funny jokes were played around jobs, prostitution and working life.

Onto the next performer walked Debs Gatenby (Hi, Anxiety) who came slowly onto the stage while still talking on the phone. This of course was part of the act about how she was an 'Online Entrepreneur' who had combined the two hobbies of Yoga and drinking. The two cans of actual beer worked perfectly as props, they were not empty!

Mawaan Rizwan (YouTube sensation / BBC Three How Gay Is Pakistan?) took to the stage next with songs, poems and raps which got some people roaring with laughter in their seats as an amazing member of the audience named Gary got dragged up onto the stage. From then on Gary was the target within the audience, but he loved every second of it.

Next up was the comedy duo Toots & Leigh who performed short sketches based on a number of things like a lesbian bingo caller who had just been cheated on, and two prison inmates stealing each other’s cake and again Gary was pulled onto the stage for his second appearance.

Finally headlining the night was the absolutely hilarious American Desiree Burch (Funny Women Winner 2015, Welcome to Night Vale). Giving her insight into how London is different from the US and how the people differ in every way. Poking fun at herself went down well with the audience by stating how flat her ass is that you can even sign paperwork on it!

The host Jonathan Mayor was always heard off stage at the side laughing which brought the atmosphere in the room even higher which made for a great evening.

Queer Comedy Night is one not to be missed next year when Queer Contact returns in February 2018.

Image and review by Drew Wilby for Canal St Online

There has been sell out performances in New York, London and Edinburgh and now Manchester.

201 Dance Company burst into Contact Theatre with stunning movement, choreography, lighting and music which made everyone in the room enthralled.

'Smother' was a story of two men’s broken encounter which was interpreted through dance and amazing drive by all that were on the stage.