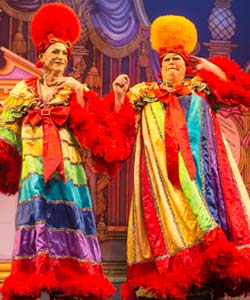 Cinderella at The Opera House Manchester

Everyone loves a panto don’t they? Oh yes they do. Manchester certainly does and was in fine voice for Cinderella at the Opera House.  The place was packed to the rafters with excited children and quite a few excited adults as well to welcome Torvill and Dean as they made their pantomime debut as the Fairy Godparents, Queen Juniper and King Crispin.

Swapping their ice skates for rollerblades, the stars of the Winter Olympics and Dancing on Ice treated us to routines worthy of their competing days, although they didn’t look quite as comfortable on wheels as they do on ice, with the odd stern face and wobble!

Cinderella is probably the best known and loved of all pantos and this production spared no expense,  with lavish sets and costumes.

Eloise Davies and Liam Doyle were centre stage as Cinderella and Prince Charming , performing their roles adequately but it has to be said, fighting for the limelight at times from an incredibly strong supporting cast.

Samuel Holmes as Dandini was fantastic, outcamping even the Ugly Sisters and playing the audience perfectly.

But the star of the show was undoubtedly Andre Vincent who absolutely shone as Buttons. The whole audience warmed to him from the very beginning and his comedy timing and stage presence was a joy to watch.

The whole company gelled together really well and with the finale of Bolero, performed by Torvill and Dean, we all left more than satisfied and most definitely in the Christmas mood.