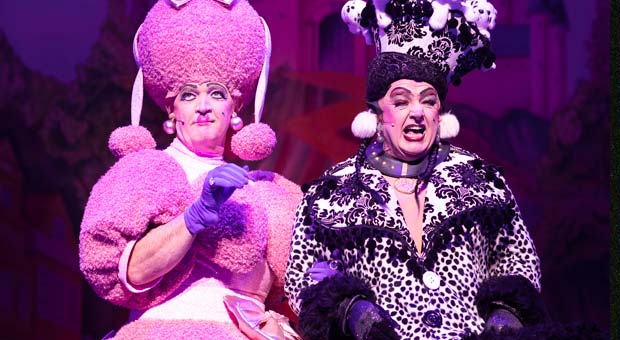 Three years after its last outing at this theatre, the fairy godmother of all pantos, Cinderella, returns in fine fettle. Ably supported by my young reviewers – Zara and Noah – we anticipated an exciting night ahead and were not disappointed.

The classic tale of the downtrodden daughter, cruelly put upon by her evil step-sisters then rescued by her Fairy Godmother (a sparkly Hayley-Ria Christian) is the ultimate happy ever after story. In this lavish production, the girls will love Cinderella (cutely played by CBBC’s Shannon Flynn); the boys will giggle at Buttons and those of us slightly older will relish the comedic pairing of Corrie’s Connor McIntyre as Phelina and Les Dennis as his equally nasty sister Michaela. Sinister McIntyre needs to relax more into his role but this is more than made up for by the panto brilliance of Dennis.

The star of the show is, undoubtedly, Ben Nickless as Buttons. Reminiscent of a young Bobby Ball, he draws every inch of comedy out of his time on stage from spoiling the romantic liaison in the woods to the hilarious pre-finale slapstick routine (which left Phelina losing more than her dignity!). The audience lapped up the corny gags, ahh-ed at his bad luck and spurred on the cheeky chappie in his quest for love.

The Greatest Showman has had a huge impact around the world, and inevitably has to have a presence in every panto this year. The three big numbers included in this production were, perhaps, a little too big for the voices of the cast but were enjoyed by the audience. Musically, Gareth Gates (a softly-spoken Prince Charming) comes into his own with his 2002 hit Unchained Melody in the beautiful, emotional Ballroom scene.

The sound balance needs tweaking so that vocals and dialogue are clearer, and the first half was a little long – Button’s LP routine was clever but felt like a space filler and went over the heads of the younger audience. However, sumptuous costumes, an impressive Disney-esque transformation scene and a talking teddy all ensure a riotous evening and a sure-fire hit with children young and old. A 5 star thumbs up from us!