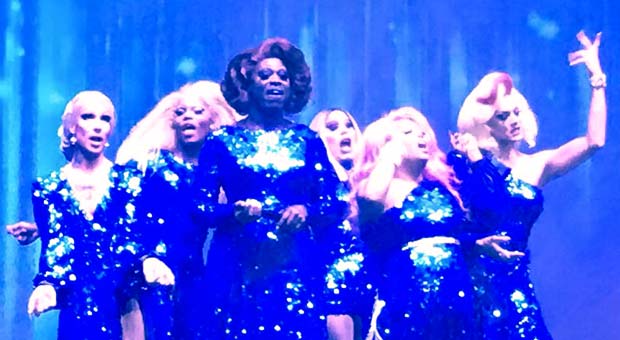 In a first for Canal Street Online, we were invited to review Christmas Queens hosted by Voss Events.

I had heard from friends who attended last year,  that this was an event that needed to be attended. The line-up certainly spoke volumes with an array of queens from across the seasons of RuPaul’s drag race with the likes of Manila Luzon from season 3 through to Eureka from Season 9/10.

The host of the show was Bob the Drag Queen from Season 9 and her comic timing and delivery were exactly what was needed to carry such a festive event. A major pro of this particular show is the fact it’s a seated event with plenty of leg room if you do want to get up and dance. Another pro for me watching this event is that you get the Rupaul stars that you pay for, every single one of these queens can carry a show on their own so to bring them together is, of course, a bonus.

Christmas Queens benefited from being an incredibly polished event with defined sets and all of the queens got the opportunity to shine. We also had a special guest Santa Claus make an appearance with the ever-energetic Eureka O’Hara. The queens know how to deliver variety whether it is the group sets or comedy and audience participation with Bob or the crazy lip sync performances from Asia and Jiggly.

The line-up was a little different to what was billed but that certainly is not a negative,  as we got to see the beautiful Manila Luzon and Bob the Drag Queen who were not originally announced.

The Queens were very open to fans coming up to greet them at the end of the show which additionally gives a real sense of openness to what is otherwise an incredibly professional event.

On a personal note I massively enjoyed the show and would highly recommend seeing an event put on by Voss events in future.

A big well done to the team!

For more about Voss.