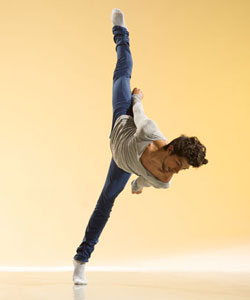 A Flash of Light:
The Dance Photography of Chris Nash - is a retrospective of his work spanning the last three decades. The selection of pieces are snapshots of movement caught in time, captured for eyes to gaze upon and minds to pour over.

The richness and dynamism of the images and incredible variety of references and influences in his work combine to create the 'stories' Nash intends his canon to be comprised of. [Improvisation], for instance, depicts in black and white, a man in professional dress, gazing gracefully upwards whilst leaping vigorously, wearing neither shoes nor socks (a hint of the deadpan humour that pops up in the photographer's work).

The individual details of the image combine to emit a potent sense of liberation and a vivacity of spirit that transcends the cool monochrome pallet. In contrast, in By Force of Fantasy, a female dancer is lit from above in stark red light, set against a background of rich blue, her body hunched into a foetal position and suspended in midair above a bed. It is unclear to the viewer whether she is falling from some unknown place or floating off into the ether, the only tangible notion is the sublime sense of fantasy the picture emanates.

Whether the piece is in black and white, bold and vibrant colour, blurry surreality or crisp expressionism, Nash's unique vision is evident of his artistic flair and humanistic intent. His influences are broad, drawing from many artistic disciplines and important theoretical and historical movements - Fellow photographer David Bailey, controversial Austrian artist Egon Schiele, Film Noir, Renaissance art, Classical sculpture, Surrealism, and postmodernism are but a few apparent in this collection.

Viewers drawn to art with a political edge will not be disappointed as Nash does not shy away from of controversial and progressive topics, frequently playing with gender roles and sexuality, and even depicting images of Beijing's Forbidden City in a Dali-esque piece entitled Chinese Takeaway that was omitted from the exhibition of his works in China. Whether simply looking for a vibrant visual display or something a little more cerebral, this exhibition should have something for everyone.