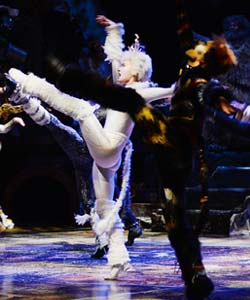 Cats at The Opera House Manchester

And we were there for the opening night.

Andrew Lloyd Webbers worldwide smash feline musical Cats is back in Manchester over 30 years since it opened in London. The show was seen to be a huge risk back in the day and no one would have believed that the show would run for more than two decades in London and be successfully produced around the world. The show is back on the road with a fresh UK tour with no big names, which seems to be the new trend for the show in the West End. In saying this, the large cast is hugely talented made up of singers and dancers who bring life to the reworked script. Standout performances come from Sophia McAvoy who is adorable as the White Cat whilst Shiv Rabheru steals the evening with his number Mr Mistoffelees. Joe

Henry and Emily Langham also put on a fine performance for their song and dance duet Mungojerrie and Rumpleteazer.

The costumes for the musical are iconic and they have stood the test of time with a few tweeks since the original production. John Napier who designed the costumes and the junk yard set has certainly worked his magic on this touring production. Many touring shows have to scale down the set but this rendition of the show does not show any signs of being watered down which is more that can be said for the band. The shows Musical Director, Tim Davies could really have done with a bigger band. In parts the show lacked brass and the strings sound very synthesized. The lighting design compliments the set perfectly and full credit should be given to David Hersey for this. Gillian Lynne’s choreography is a great asset to the show although there are parts of the show that were not as slick as they needed to be. There was a slight feeling that the press night performance was a work in progress but I am sure after a couple of performances the show will be perfectly on point.

The musical  is set at the Jellicle Ball where the cats perform for Old Deuteronomy. The story is told with a fantastic catalogue of musical numbers including Jellicle Ball in Act One which is stunning and Memory which is performed by Grizabella the Glamour Cat in Act Two. In this production the iconic number is performed by musical theatre veteran Anita Louise Combe who has years of experience but large shoes to fill as theatre goers still link Elaine Paige to the track. Anita expresses the song well and she fills the stage with her presence however it has to be said that it’s not the highlight of the show.

It’s great to see such a legend of a show back in Manchester and it is one to watch for sure.

Full details and to book.