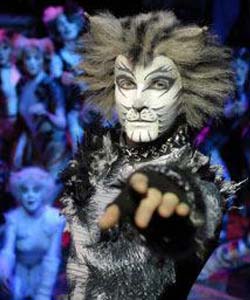 Cats at The Opera House

Wednesday evening and your Canal Street Correspondent is hanging around dark streets and alley-ways after dark.

Not for the first time I hear you cry!  No not like that, Canal Street is a guest at Manchester’s Opera House, for the 2013 tour of Andrew Lloyd Webber's smash hit "Cats".

This famous musical based on "Old Possum's Book of Practical Cats" by T. S. Eliot  tells the story of a tribe of CATS called the Jellicles and the night they make what is known as "the Jellicle choice" and decide which cat will ascend to the Heaviside Layer and come back to a new life. C

The original production directed by Trevor Nunn and choreographed by Gillian Lynne,

Cats first opened in the West End in 1981 and then with the same creative team on Broadway in 1982. It won numerous awards, including Best Musical at both the Laurence Olivier Awards and the Tony Awards. The London production ran for twenty-one years making it the fourth longest-running West End musical.

The 2013 tour of the Cameron Mackintosh and The Really Useful Theatre production of Cats is again presented by David Ian. It recreates the original London production in a magical way.  Music, dance and verse fuse together in an enchanting blend of fantasy, drama and romance.

Lloyd Webber's score is both epic and playful. Gillian Lynne's choreography remains fresh and alluring after over thirty years, Impeccably observed and realised.

On entering the theatre you're entering a dump - a giant playground for CATS. The atmosphere is set before a single note is sung, before a cat is even seen. An abandoned car, larger than life-size tyres, boxes of Shreddies, Ritz biscuits, paper plates, cans of Pepsi litter the auditorium and strings of fairy lights hang from the boxes and around the circles, it's magical, yet rubbish.

From the moment the glorious orchestra boom out the overture these talented tabbies are spell binding vocals, choreography, costume and fiendishly difficult make-up combine to present the stories of these practical, dramatical, pragmatical, fanatical, oratorical, delphioracle CATS.

Munkustrap acts as the narrator of the story and played by Ben Palmer (42nd Street) we get a solid and strong grey tabby who impresses throughout, particularly in his telling of Old Deuteronomy. Also leading the males is Oliver Savile (Les Miserables) as The Rum Tum Tugger, a curious cat - milking it for all it's worth, this cat revels in strutting around and gaining everyone's attention which Savile certainly achieves, riffing his way powerfully through the final choruses of Mister Mistoffelees and impressive vocal range is evident. Nicholas Pound is majestic and in fine voice as Old Deuteronomy.

Two other impressive duos are Barnaby Thompson and Katie Warsop as Mungojerrie and Rumpleteazer in their song, and in dance Richard Astbury and Lizzi Franklin as Coricopat and Tantomile. Ross Finnie is a delight as Skimbleshanks the railway cat, the scene in which the CATS build the train from rubbish is genius.

Memory, perhaps one of the most famous songs in Musical Theatre history, provides a lot of pressure to follow in the pawsteps of Elaine Paige.

How do you manage to wow thousands of people across a year-long tour...? You cast Joanna Ampil as Grizabella. Simply show stopping.

A magical night of theatre, and well worth a visit; CATS plays at the Opera House, Quay Street, Manchester until Saturday 20th April 2013.