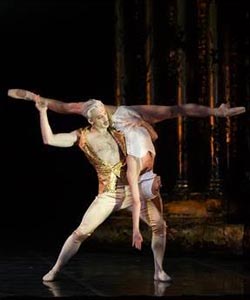 Casanova at The Lowry

Northern Ballet’s Casanova at the Lowry

Northern Ballet’s latest piece focuses on the famous lothario with an unquenchable desire, and it’s a feast for the eyes of the ears. This is partly because composer – Kerry Muzzey delivers a cinematic score reminiscent of Phillip Glass’s End of The Affair. And there is irony here, because Casanova’s hedonistic lifestyle is self-destructive and thus, must end.

Giulliano Contadini is stunning in the lead role, as he manages to convey the character’s flirtatious nature, but also the fact that he lives in a world that is disposable, including his lovers. One brilliantly realised scene, in which his conquests step forward one by one, resembles an automated till: “Lover Number One, please!”

When Kenneth Tindall’s stunning piece catches, fire is during the ensemble pieces, as the dazzling colour of the costumes, and the graceful movement combined is completely intoxicating.

When the focus is on Casanova alone, it is never as visually arresting. Part of the problem is, there is a great deal of narrative to pack in, and however good this ballet is, some of the overall meaning is lost through dance, alone.

However, this heady mix of sex and murder is given a great Venetian backdrop by Christopher Oram, which places you right there, amongst the incense and the splendour.

Ballet is often seen as elite. But, Northern Ballet have fused the look and feel of a Pedro Almodovar film, with the sex appeal of Madonna’s Vogue and the result is addictive.

Northern Ballet's Casanova is at the Lowry until 6 May Tickets.