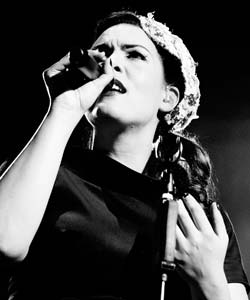 Caro Emerald at The Bridgewater Hall 2018

Caroline Esmeralda van der Leeuw, known better by her stage name of Caro Emerald, is a Dutch pop and jazz singer. She debuted on 6 July 2009 and has gone on to be a million selling artist with an international reputation.

She appeared at The Bridgewater Hall, Manchester and we were there to see her.

The support artist for this event was Andreya Triana who is a British singer-songwriter from London. To date, in the past she has collaborated with Flying Lotus, Mr. Scruff, and Bonobo and is a songbird﻿ likened to the late Amy Winehouse and Lauryn Hill.

Andreya's voice is both soulful and haunting and proved to be perfect support for Ms Emerald on the night.

Her short but enjoyable set really hit the mark with an appreciative audience, who had arrived early for Ms Emerald.Our personal favourite was her rendition of the Paul Weller classic 'Wild Wood'which received her best ovation.

After a short break, we were then ready for the Dutch Diva to take to the stage.She didnt.Appearing for her first number in the circle stage right.This unusual opener really set the tone for what was to follow and right from the start demonstrated the unique acoustic of the Bridgewater Hall.

The 32-year-old singer from Holland mixes, giddily and with tremendous ease, a mix of swing, mambo, tango, Latin and big band.Caro and her superb musicians are the ultimate collaboration of talent, fun and energy.

Having taken the world by storm with 'Deleted Scenes from the Cutting Room Floor' and the follow album 'The Shocking Miss Emerald',both of which topped the UK charts aswell as many other countries, this ensemble quickly became known for their great live performances and last night at The Bridgewater Hall showed a packed to the rafters Manchester audience, exactly why.

The diminutive Ms Emerald (became even shorter when she kicked off her shoes) dominated the stage with her presence and whilst not the chattiest performer i have ever seen, was able to build an immediate rapport with her loyal fans, many of whom were clearly what we would call'mature'..

"Back It Up", "A Night Like This", "That Man" "Liquid Lunch" "Stuck" ''Riviera Life" all featured on the night as did a surprise version of ''Last Christmas''.

One of the other great features on the night were the stunning visuals which accompanied most tracks.Computer generated and vibrant, they evoked a 'Time Sq' kind of feel to the place, all of which served to enhance the enjoyment of the music.

Another memory for me was the simple, but effective choreography of the entire band stretching from charleston dance moves through to mambo and all carried off whilst still playing.Quite a feat.

Indeed throughout the set, the musicians were all wonderfully versatile, one played Clarinet, Tenor Sax, Bass Sax, Guitar, Keyboards and percussion too, as well as vocals and those moves too.

All in all an evening with Caro Emerald is a memorable one, and as the virtually full house headed for the streets of Manchester, we heard nothing but superlative and high praise.