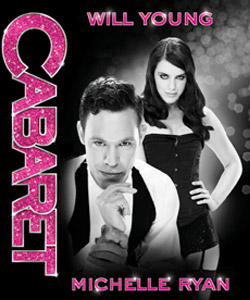 Cabaret at The Lowry

This classic musical sets love, sex and debauchery against a background Berlin Cabaret in 1931 and the rise on Nazism in the 1930’s really packs a punch.

Will Young was the runaway star of the show, playing the MC of the seedy Kit Kat Club. He was born to this role and perfectly cast, white-faced and manic.  Young is clearly enjoying himself and deserves his share of the standing ovation at the final curtain.

His co-star Michelle Ryan couldn’t really compete with Young (or Liza for fans of the film) as she didn’t quite have the presence to carry off the role of Sally Bowles.She looks fantastic and moves beautifully however and enjoys many momorable moments throughout the show.

As we lose ourselves in the plot and mayhem of the debauched Kit Kat Club, it comes as something of a shock when Ernst Ludwig (Nicholas Tizzard) takes off his overcoat to reveal a swastika armband. And that's where the lives of both couples begin to unravel.Its also a turning point in this production,when you are suddenly reminded of the horror of the evil that existed at that time.

Highlights of the night (and that of the majority of the audience, judging by the general reaction), Young’s songs: 'Two Ladies', 'The Money Song', 'If You Could See Her' and, of course, 'Wilkommen'.

The staging of each is both memorable and impressive,with some very clever staging and choreography involving staircases and the hard working dancers.

In stark contrast to the hedonistic,bi-sexual 'antics' of some of the main characters,the old fashioned affair between Fraulein Schneider,played by the sublime Sian Phillips and Herr Schultz,played equally well by Linal haft,provided charm and at some times humour, against the dark backdrop of events across the rest of Europe.

A lovely performance too by the delightful Harriet Thorpe as the witty hooker Fraulein Kost.

Rufus Norris's deft handling of the production,takes us through the entangled plots and sub plots and leaves us feeling sad at the memory of what actually happened in Nazi Germany,but somehow uplifted by the performance we witnessed.Quite a task.

The Kander and Ebb songbook always carry's any production of this legendary show safely forward.This production was no exception.

Cabaret plays at the Lyric Theatre, The Lowry to Saturday 29 September.Grab a ticket if you can before its London transfer.