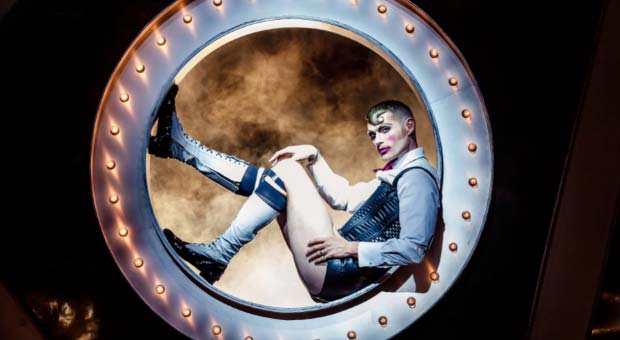 Based on John Van Druten’s play I Am a Camera (adapted from Christopher Isherwood’s 1939 novel Goodbye to Berlin), Cabaret began life on Broadway in 1966. The creative talents of Kander, Ebb and Masteroff penned what became a global sensation on stage and film, introducing us to the needy Sally Bowles and the enigmatic Emcee at the Kit Kat Klub of 1931 Berlin.

For this latest UK tour, Rufus Norris directs a faultless production; the staging, the cast and the 8-piece band deliver a 5* experience. Kara Lily Hayworth impresses as the cocksure (but vulnerable) club singer Sally Bowles; a powerful voice and a particularly emotive performance of Cabaret; alongside Charles Haggerty, with an equally impressive voice, as her bisexual love interest Cliff. Anita Harris (Fraulein Schneider) and James Paterson (Herr Schultz) offer a gentle side story of elderly love, that becomes key to events later in the story. And special mention must go to the gym-honed beautiful boys and girls of the Kit Kat ensemble who leave very little to the imagination.

John Partridge takes on the iconic role of Emcee, a part that could have been written for him. He teases and abuses his audience with Joker-esque make-up and impressive thighs, offering a character you want to dislike as much he appears to despise his audience, yet find so mesmerising you want him to remain on stage throughout. Where previous tours have had success with a lead known for dance or song, Partridge proves he can dance, sing and act; an astonishing performance that takes us from the hilarity of Two Ladies (there were a few more than two!) to the raw emotion of I Don’t Care Much as the mask lifts to reveal the fear behind.