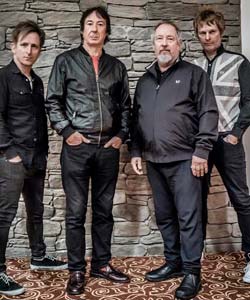 Manchester’s first punk band celebrated their 40th anniversary with a homecoming gig, close to where it all began.

Buzzcocks opened for the Sex Pistols at the Lesser Free Trade Hall (now the Raddison Edwardian hotel) in 1976, a gig that has become so famous it featured in the film 24 Hour Party People.

That venue is now a hotel but the Albert Hall, further down Peter Street, is just as grand with its huge pillars and ornate stained glass windows.

Opening with Boredom, from their debut EP Spiral Scratch, their set felt like a favourite compilation tape.

Original members, Pete Shelley and Steve Diggle, were joined by Chris Remington on bass and Danny Farrant on drums, providing an energetic and polished performance on hits such as Promises and Love You More.

Not that Diggle, 61, in a bright red shirt and white trousers, needed any help on the energy levels. He threw himself around the stage, swinging his arm above his head as he played guitar, looking like he might smash it up, Pete Townsend style.

Shelly, also 61,was more restrained, dressed all in black, as he delved into their impressive back catalogue without chatting to the audience but that’s fine. We don’t want the him turning into John Lydon on butter adverts.

Although it could be argued that What Do I Get?, featuring on a fast food takeaway’s advert has helped them reach a whole new younger audience. It certainly kicked off the moshing for the encore, followed by Orgasm Addict, Ever Falling In Love and Harmony In My Head.

Buzzcocks have inspired so many bands, stories and a TV quiz show,that it is surprising they have not yet had a film of their own. However having released their ninth studio album The Way in 2014, fans are now hoping for a tenth.