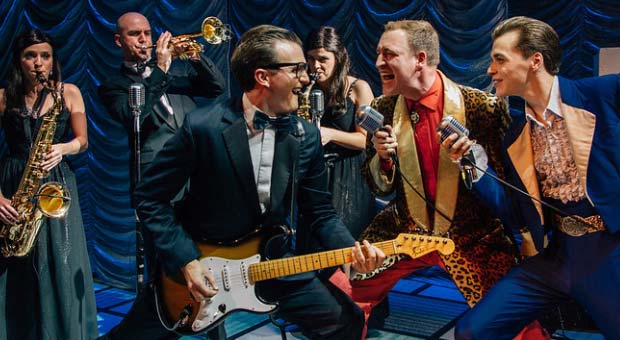 Buddy – The Buddy Holly Story is currently touring the UK as part of its 30th anniversary celebrations. The show was one of the early West End productions to require the performers not just to act and sing, but also to play at least one instrument – the music, no longer confined to the pit or behind the set, exploded into the heart of the action. Casting actor-musicians as the essential characters in the story of Buddy Holly ensures an authentic, raw feel, allowing the audience to experience what 1000s of young fans felt in Buddy’s heyday. This is the story of Buddy’s meteoric rise to fame before his untimely death at just 22.

The show may be older than many of the cast, but the producers continue to find talented young actors to take on the iconic roles. Christopher Weeks takes on the title role with an impressive Holly vocal and energetic stage presence, alongside AJ Jenks (rhythm guitar), Joe Butcher (dextrous bassist) and the talented drumming of Josh Haberfield as The Crickets. Ben Pryer gets the house bouncing with La Bamba, and Joshua Barton sings it large as The Big Bopper, however the number of cast members has slimmed down over the years, and Harry Boyd, particularly, suffered from playing too many roles that merged into one and confused the story.

Holly’s life was short, but his music influenced generations to come, and this show is packed his iconic tunes, including That’ll Be The Day, Peggy Sue, Heartbeat and True Love Ways. Buddy (the musical) inspired a host of subsequent jukebox productions, and continues to lead the way as a slick, foot-tapping night out. 30 years young and still guaranteed to rock ‘n’ roll you to your feet.