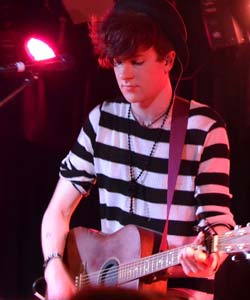 Propelled by the success of their respective YouTube channels, Brian O’Reilly & Tessa Williams – known more popularly as Bry & Tessa Violet – brought a small crowd of devoted fans to Bry's headline show at Manchester Academy. We went along for Canal Street Media to see what all the online buzz was about.

First up was fellow singer-songwriter & YouTube creator Dave Giles.  Whilst the audience was quiet at the start, he grew in popularity and confidence as he went on, and ended the show in the middle of the audience, an intimate and crowd-pleasing finish to the set.  His EP pre-sale is on now on iTunes.

Next up was Tessa Violet.  From Tennessee, she'd joined Bry on his tour in Ireland & Northern Ireland, and has worked with him online a number of times.  Whilst the tour was Bry's, Tessa's energy and frank and funny discussions with the crowd were almost a show-stealer.  Her songs were lovely - pure, sweet, and a lot of fun - and the crowd sang along to all.

Bry is probably one of the most Irish sounding singers I've ever had the pleasure of hearing.  Someone brought an Irish flag along & he loved it - and he tried to wiggle a drinking game into the set too (Never ask him to tell you about the time he went on tour with Twenty-One Pilots) - so there's probably not many more-Irish people out there.  He played a solid set, a mix of work on his acoustic and electric guitars, and a couple of songs on his piano - all of which the crowd knew every word to.  He's clearly growing his presence well online, and in person he's just as charming.

The gig was a lot of fun - quieter perhaps, but far more personal, wholesome and just a bit more lovely than a lot of the busier gigs we've been to recently, which we can only suppose is the intimacy of a YouTube video transpiring well onto stage.  We expect big - and bigger - things from all three of the singers very soon.