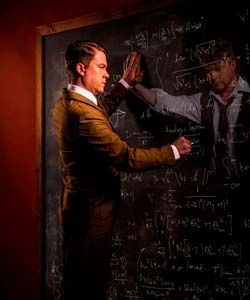 Breaking the code at Royal Exchange

In the aftermath of victory, Turing arrived in Manchester with an even bigger task in mind – the development of the modern computer. It would be a task he left unfinished, publically humiliated and destroyed by the revelation of his sexuality and prosecution for indecency.

Hugh Whitemore’s critically acclaimed play Breaking the Code was first performed in 1986 with Derek Jacobi in the lead role. 10 years later Jacobi reprised his West End and Broadway triumph for a BBC film adaptation. Looking at the life of British mathematician Alan Turing, the script criss-crosses time over 25 years, juxtaposing his cryptographic and homosexual activities. 30 years on the Royal Exchange revives Whitemore’s piece under the direction of Robert Hastie, and Daniel Rigby in the lead role.

Rigby is brilliant. He shines and relishes the monologues, capturing the beauty of the mathematical mind; Turing’s love of numbers; and the possibilities of an electronic brain. He balances this perfectly with the awkward social charm and brutal honesty (an honesty that proves to be his downfall) evident in his personal life. Ben Stones’ stage design offers minimalist mid-20th century parquet and furniture at floor level, whilst pulses of electronic energy flash through a network of constantly re-positioning neon tubes above our heads - a stunning lighting design homage to the electronic brain.

Breaking the Code was written at a time when homosexuality, whilst no longer a crime, was shrouded in the negativity of Clause 28 and links to HIV. It told a controversial story unknown to most, but in the Manchester of 2016 it tells us little that is new. Turing’s posthumous pardon in 2013; Benedict Cumberbatch’s 2014 big movie portrayal, and the recent heated debate in Parliament have ensured the British public are aware of the man who helped end WWII, his conviction for gross indecency in 1952, and untimely death 2 years later.

The production offers moments of hilarity and emotional glimpses of young love and maternal warmth. Electricity sparks with the second half opening monologue (reminiscent of a Royal Institute Christmas Lecture), but plods through Agatha Christie-esque detective scenes elsewhere. However, this is an important slice of LGBT history. Alan Turing was just one of 50,000 men convicted for homosexual acts; around 15,000 are living today. This production not only allows us to see the man behind the genius and enjoy the brilliance of Daniel Rigby’s performance, but acts as a reminder of the importance of pushing through legislation to pardon all those unjustly convicted.