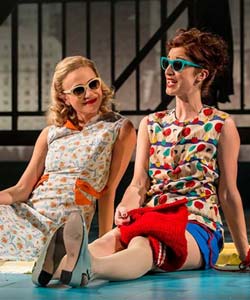 The late Truman Capote is known for his biting wit, and the movie version of Breakfast at Tiffany’s features a star turn from Audrey Hepburn and has become a classic. So, on paper - this new stage production, starring songstress and Strictly dancer - Pixie Lott should be a treat.

I say should; because sadly it simply plods along in search of a resolution. If you remove your rose tinted specs, the movie is good but not great. But, here everything is so stilted, that it almost feels motionless.

Part of the problem, is that lead character Holly Golightly is such a player and lacks heart. Hepburn’s version was written for the film, whereas here - the source material is the book. In terms of persona - Pixie Lott comes across as nice and sweet, whenever we see her on screen. So, it was always going to be gamble getting her to play such a cold and heartless character.

Adaptor Richard Greenberg has attempted to resolve this by getting her character Holly to sing more songs than you remember hearing in the film, so that it can be dubbed ‘a play with songs.’ But this means the audience start expecting a musical, and just as they get into the musical and applaud, we return to the dull drama unfolding on stage.

Lott has the vocal chops, for sure and we knew that. She also has the poise of a girl who is turning heads, whilst fooling many men. But, acting wise - she shouts, instead of emotes and sadly, has no comic timing whatsoever, meaning that much of the sardonic humour is lost. Likewise, when the play does require her to be dramatic, again she resorts to being louder than anyone else. The result is irritation, as opposed to affection.

Matt Barber’s Fred holds things together and does an admirable job, as he is our key to the story and he is to be applauded for this. But numerous and slow set changes, a cat that clearly does not want to be there (during one unintentionally funny scene - you can see Matt Barber clinging onto the kitty for dear life, in case it runs off), uneven changes in tone throughout, an overlong first half, too many underdeveloped characters and a miscast lead... phew! You get the message.

Ultimately, this is one text best left alone - as a movie memory, or a book on your shelf, as it has been tried before on stage with Anna Friel and it did not work then, and the reviews were awful. This production is heading to London and I can almost hear the pencils being sharpened.

Breakfast at Tiffany’s just might appeal to Pixie’s fans and lovers of the movie, but to be honest you are better off listening to her music and then settling down to watch the film on DVD.

As a pop princess, Pixie Lott may have shone bright like a diamond. But even her dazzling rendition of Moon River cannot save this slow paced and confused stage production. You are better off following the cat, out of there.