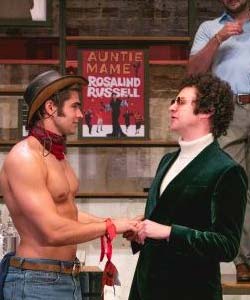 Boys in the Band at The Lowry

Boys In The Band

Mark Crowley’s play about the lives of 9 gay men, written in 1968 might be viewed as dated by some. We witness a group of stereotypes at a party filled with so many awkward exchanges, that it makes Abigail’s Party seem almost Disney-esque.

But, once the narrative kicks in, the humour remains sharp and caustic, there are many poignant moments and the self-loathing that many of the characters feel when the party is over, is something that the audience can recognise from the past, or the present.

This is not a banner waving play though, it is simply a refined character study, which highlights how attitudes may have changed in some parts of the world, but in others we see far worse treatment of LGBT people, than you see here.

The interesting point that Crowley explores is the public and private face of someone in a minority group. Emory is outwardly camp and extrovert and life and soul of any party. But, when the lights go down and the music stops, he is a lonely and heartbroken man. James Holmes steals many of the scenes with his fantastic portrayal of this interesting character. He shakes a stereotype to its foundations, and we see the real man – outside of his barbed comments.

Daniel Boys brings a sense of steadiness to Donald, a loyal friend who can join in with the bitching, but essentially enjoys the calm, as opposed to the storm. Ian Hallard plays host Michael he deserves an award for his portrayal of a man on the edge. He exudes charm, but fires lines out like heat seeking missiles, as the guests duck out of the way – for fear they are next.

Mark Gatiss has incredible stage presence, and the minute the door almost swings of the hinges – as birthday boy – Harold walks through it – is worth admission price alone. Gatiss knows how to deliver a line, by pausing and then delivering through a half sneer. And this is comedic but if it was a cup of coffee, it would be black and very strong.

Adam Penford’s direction is measured, because we have a build up to each arrival and this means that the audience enjoy the high drama much more. He is also great at making sure the comedy is laced with a bitterness. But these Boys do know how to have fun, they only turn on each other because they do not have the power outside of this apartment.

Jack Weir’s lighting is striking, as it throws a spotlight on the guy’s ever changing moods, as the alcohol is plied and masks their feelings one minute and brings out hurtful truths the next.

At times, the pacing slackens and the play itself suffers from feeling a little bit repetitious. Otherwise, this Boys In The Band proves that you can revisit a play from the past and if it is in the hands of a skilled director and as talented a cast as this one, it remains sharply relevant.

Boys In The Band is at the Lowry until 6 November.