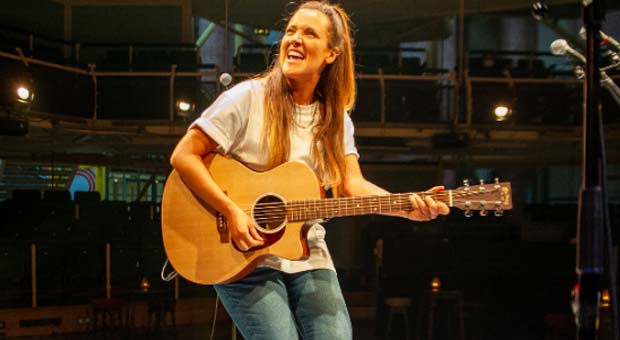 14 months after being forced to close, joint Artistic Directors Bryony Shanahan and Roy Alexander Weise welcome us back to the Royal Exchange in an emotional pre-show speech. It’s been a tough period for everyone, not least the Arts, but live theatre is back and welcomed with rapturous applause.

Bloody Elle – a Gig Musical is a Royal Exchange world premiere, written and performed by Lauryn Redding. Redding plays Elle…and everybody else in this uplifting, one-woman show about falling in love for the very first time. Surrounded by microphones, guitars, pedals and cables, Elle talks, plays and sings her story, from life on the 10th floor in the clouds to working shifts at Chips and Dips…and meeting Eve.

This is a classic story told in a contemporary way – Redding displays incredible versatility as she narrates, emotes and transforms into the eclectic characters of her life. She draws us into the excitement of first love, the nervousness of coming out and the heartache of relationships. Bryony Shanahan’s direction keeps the action moving, ensuring Redding fills the stage with her singular presence, from intimate gig to the feel of a capacity-filled arena.

Redding not only impresses with her performance – she also wrote the script and original score. Lockdown offered her the freedom to create; the Royal Exchange gave her the freedom to release that creativity on its audience. We may have been socially-distanced and at limited capacity, but together we filled the theatre with laughter, applause, cheers and, most of all, love. Live theatre needs you NOW more than ever, so please support our amazing artists and venues.

The Royal Exchange has opened its doors with a stunning production, and we opened our arms in a giant hug of appreciation. With Lauryn Redding’s phenomenal talent, Bloody Elle is a seamless two hours of pure joy.