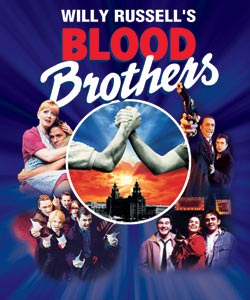 Visiting Manchester’s Opera House on Monday evening, your Canal Street Correspondent was transported to the gritty reality of Liverpool in Willy Russell’s Blood Brothers.
It has a moving and thrilling storyline.  It’s a stomach-wrenching emotional rollercoaster that right from the start left the audience in no doubt that all was going to and in tears, and it certainly did! (Keep the Kleenex handy).

Set in Liverpool in the starting in the early 60s and spanning over 20 years, the show tells the story of twins, born to a struggling single mum who already has 'them welfare people knockin' at the door', Mrs Johnston (Maureen Nolan) has little choice but to sell the one of the twins for £50.

Their lives follow very different paths, with the kept twin Mickey (Sean Jones), growing up in the rough side of Liverpool, and the adopted twin Eddie (Matthew Collyer) enjoys a privileged middle-class upbringing, where he went to the local private school.

By chance, they meet several years on, unaware of their tragic beginnings, and becoming best mates, they take a vow once realising there birthday lands on the same day to become Blood Brothers.

The story is a social commentary.  The separated twins move from youthful dreams, through teenage rites of passage and then through to the harsh realities of Liverpool life under Thatcher’s government.  How ironic that interest in this show has peaked again 20 years on where austerity has again brought unemployment, deprivation and families living (or at least attempting to survive) on the “never-never”.
This show has come full circle and know has more of a sense of relevance than maybe in the 80s and early noughtys.  It shines a very uncomfortable light on the class system, privilege and the fairness of life chances.
Your Canal Street Correspondent has had the opportunity to see this show (even with the original London cast ?? years ago) several times.  You expeact to leave in tears.  What did come as a surprise was the amount of times my friend and I actually laughed out loud.  It's the childish cheekiness of the ensemble playing the children, lead expertly and touchingly by Jones as Mikey.
Jones transforms from mischievous seven year old to confident scally-wag to soul-crushed man.  His portrayal was believable and honest.  He was lovable, touching and moved you to a deep nagging sense of pity.
Collyers portrayal of Eddie was also touching and poignant, you feel heart wrenching pity for this character who for all the privilege could not overcome the circumstances forced upon him and his ultimate destiny
Daniel Taylor as Sammy and Kelly Anne Gower as Linda, add some great comic relief, especially through the 'puberty years'! Gower then transforming effectively from comic school girl to tragic wife and then single mother as the circle turns again.
Marti Pellow as the narrator was the weak link in an otherwise stellar cast.  His acting was wooden.  His accent varied from somewhere just south of the Wirral to north of Glasgow.  His annunciation was such that on occasions you could make out what he was saying.  Let’s hope that over the period of this run his performance improves to the extent that he can hold his own in the cast line up.  He can do better.
The production stayed true to the London original, staging lighting sound and direction sensitively constructed to bring pathos to this extraordinary musical.
The real star of the show was Mrs Johnston (Maureen Nolan) particularly at the tragic finale to Act 2, the agonising Tell Me It’s Not True; both twins dying on “the self-same day.”  I have seen Nolan in this role before, her performance is now greatly improved, her emotional and sell studied performance ensure you really believe her deep yearning love for her twins, and you cry with her when she loses them.  Expertly acted and sung.  The standing ovation very well deserved.
Overall, a real tear-jerker, well worth a watch, particularly if you have not seen it before. 9/10
Blood Brothers play at Manchester’s Opera House, Quay Street, Manchester to Saturday 30th June 2012 http://www.manchestertheatres.com/operahouse.htm