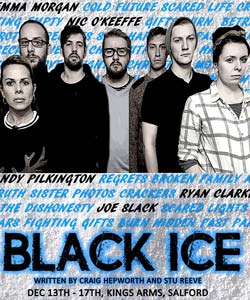 Award winning Vertigo Theatre Productions have decided once more to give us a Christmas show with a dark twist. Writers Craig Hepworth and Stuart Reeve have created the Harrison family, a family with a secret that has been hidden for the last thirty years.

After the death of both of his parents, Bill wants one last Christmas in his childhood home, to enjoy the day and to finally break the silence of what happened there to his adult children. But this is one screwed up family. Their daughter Sam arrives with her husband Gregory and only a couple of weeks away from giving birth. Her brother Danny arrives with his boyfriend Callum in tow. It quickly becomes clear that this is not a happy family, but the depths of the problems and their effects on the present day unfurl as the show progresses. Unfortunately for the family each step sends them further into the dark.

As usual Vertigo have assembled a group of highly talented actors to portray these damaged characters. Vertigo stalwarts Stuart Reeve and Richard Allen both give incredibly powerful performances as the father Bill and son Danny. Stuart Reeve's Bill is uncomfortable to watch, as you can see a man driven to to the brink by what happened in his childhood. Richard Allen's Danny on the otherhand is brash and outspoken, but hiding his own part in the family secret. The rest of the cast as equally as strong. Emma Morgan a convincing Abby, supporting her husband through his turmoil but struggling with the implications. Nicola O'Keeffe (Sam), Joe Slack (Gregory) and Ryan Clark (Callum) all shine while Andy Pilkington as Bill's brother Jonathan is stunning as the man who has tried to leave his past behind but in avoiding it has only let it dominate his life.

Craig Hepworth has directed this ensemble show with his usual skill and aplomb. Never afraid to take risks or to show a side of reality that is darker than the norm, he brings his characters to life but never overplays them.

Black Ice is not some happy happy Christmas froth, but if you like an excellent strong drama then this is the show to see. Vertigo have a reputation for stunning theatre, Black Ice is another superb show from this amazing company.