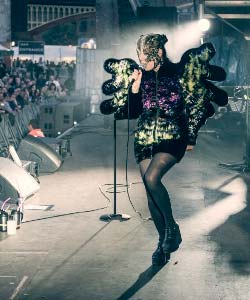 Bjork’s first European gig since the release of her latest album, Vulnicara, is a curious affair.

The Castlefield Arena in Manchester is packed to the rafters (there are no rafters, but you get my meaning) with a crowd who palpably don’t know what to expect. Anyone expecting a yomp through her greatest hits was disappointed - Vulnicara is the main course here, an intimate document of her painful break-up with long-term partner, artist Matthew Barney. Stone Milker opens the set and is beautifully wrong-footing. A melancholy anti-love song, it sets up the evening:

At last the view is fierce

All that matters is

And who has coagulated

This is no celebration - it’s an alien autopsy. Sometimes bitter, often achingly sad, the majority of the performance is accompanied by a string orchestra, dressed all in white and frequently with video projection depicting insects in various stages of metamorphosis or devourment.

That’s not to say the performance is without light or joy. Red smoke fireworks are blasted out from behind the stage early in the set (during daylight) to the crowd’s obvious delight. And Bjork herself is simply superb. Her voice is incredible. It’s simultaneously vulnerable and defiant, and effortlessly tuneful – especially during the moments where the orchestration is sparse and Nyman-esque spiky; her lines hauntingly sung like a violin. The cinematic quality of her new work is not to be understated, conjuring up images of barren Scandi-vistas and melancholic interactions, of love lost, and gut-wrenching betrayal.

Highlights of the evening include a subtle rendition of Possibly Maybe just as the sun went down, followed soon after by a relentless version of Army of Me which gets the whole crowd bouncing. The bass in that tune never fails to rattle my ribs. Mutual Core, from 2011’s Biophilia, is just bonkers and we are treated to a storming version of Hyper-Ballad to finish the night off.

By Chris Payne Photo by: Carsten Windhorst In association with our friends at http://www.northernsoul.me.uk/