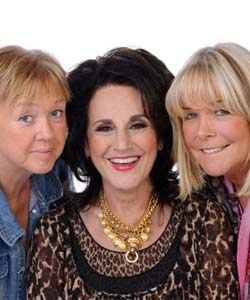 Birds of a Feather

Your Canal Street Correspondent was whisked back to the world of the early 90’s sitcom on Monday evening gaunt to the Lowry’s Lyric Theatre as Pauline Quirke, Lesley Joseph and Linda Robson revive their classic sitcom Birds of a Feather.

The new Birds Of A Feather stage show by Jenny Johnston shows these three feisty women “common-as-muck” Sharon, “new money Tracey” and their Jewish “femme-fatal” neighbour posh Dorien still have still have great chemistry and timing even after 13 years, with the Oscar (quite rightly) going to Joseph as Dorien.

Sharon and Tracy come to the aid of Dorien when she is accused of murdering an aging resident at the old peoples care home which she now owns, and along the way Travis, Tracy’s oldest son learns a little more than he bargained for about his absent father (an armed robber) Darryl.
Quirke and Robson have known each other since childhood and their lives have always been enmeshed.   It showed, the characters played well against each other with genius timing and interplay between the pair.

Things have become even more interwoven with this new show, however, because the part of one of their sons is being shared by… both their sons, playing the part of Travis on rotation, and played on Monday by Robson’s son Louis Dunford.
Dunford gave a solid performance, but it is fair to say that he hasn’t yet had an opportunity to develop the comedy presence and timing displayed by the three principal females.  Likewise safe performances from other supporting cast Robert Maskell (“Roger Zimmerman”) and Caroline Burns Cooke (“DS Tedderden”), although any supporting actor will struggle to shine when compared with the trio at the top.

The story by Jenny Johnston was classic Birds, and provided an effective vehicle for the principal cast,. Although at times it did begin to resemble a Whitehall farce.  Staging was traditional.  Set changes were carried out very quickly, and were at times assisted by OAP residents at the home.
If you are a fan of Birds of Feather you will love this show, it’s well worth a visit.