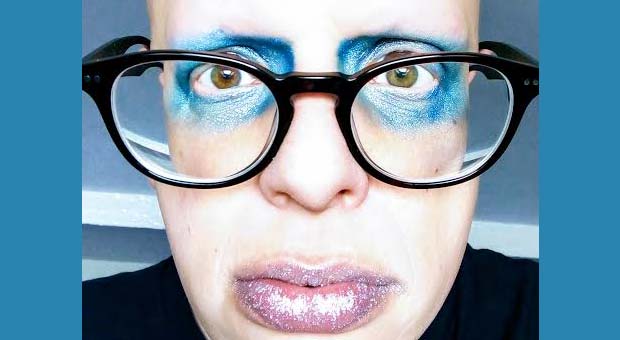 In a nutshell Big Box Aliens is hilarious and touching in equal measures, as performance artist, John Klark, takes to the stage to explore his past, identity and the future as part of the Manchester Fringe Festival.

He plays himself as well as his Gran, craftily distinguished by a rather glamourous earring, as she tells him the story of the Big Box Aliens who came to Earth to feed the Jews. You following? OK well I’m not even going to attempt to take you any further into this crazy show, you would have to see it to fully understand it and I would heartily recommend you do see it.

What I will say is Klark is a wonderful entertainer, tugging at our heartstrings one minute as he explores his personal memories then making us laugh. His re-working of Janet Jackson’s Escapade, means you will never listen to it the same way again.

Big Box Aliens is the follow up to Klark’s previous foray at the Fringe, Digital Goy and nothing escapes his attention including all the identities we have forced upon us; being Jewish, the perils of Grindr, labels, 80s kids and family. As Klark says “We are all human, we all shit”.

Klark is a great host, selling his wares (he comes from a long line of failed salespeople you know) and encouraging the audience to draw pictures and reproduce the galleries he would put on as a child in his bedroom. Lock 91 did itself proud with a very impressive Optimus Prime stuck to the wall and where else can you go for an hour’s worth of comedy and then pick up a copy of The Tale of Jemima Puddle Duck? I would be prepared to wager nowhere.

Sometimes the show is challenging and sometimes its laugh out loud funny which is how all good performances should be and most definitely shows in a Fringe festival. Everyone left with a smile on their face and you can’t say fairer than that.