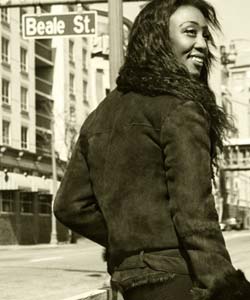 If on Saturday night you needed to know that Britain has talent, then The Bridgewater Hall, Manchester is where you needed to be, as Beverley Knight performed her Manchester date of her new album tour Soulsville.

Gracing the stage with a fierce outfit that included leather pants and Gold stiletto ankle boots, she immediately reminded her audience that she is one of the UK’s most successful soul singers as she sang ‘Soul Survivor’, her third single release from her 6 th Studio Album, ‘100%’.

Soulsville is Knight’s first studio album in 5 years and she takes us on a tribute to soul, with a mixture of soulful hits, which she recorded in Memphis, a city that she is reported to have fallen in love with. With stand out hits on the new album such as ‘Middle of Love’, which has already been getting significant air play, Beverley reminded her audience that this album stands to be one of her best yet.

The track ‘I Won’t Be Looking Back’ showcased the beauty and emotion of Knight’s voice and provided some of the finest vocal form you are ever likely to hear.

Knight showcased her phenomenal talent and vocal power for well over an hour and half, with the night including classics such as ‘Gold’, ‘Shouda Woulda Coulda’ and her debut single of 1994 ‘Flavour of The Old School’, which was such a delight. Her encore, ripped the roof off The Bridgewater Hall as the crowd partied, dance and sang iconic Whitney Houston classics with her, finishing with ‘I’m Every Woman’. This felt like a powerful celebration of her career to date, reminding us when she appeared in the Westend and took over the role of Rachel Marron in Bodyguard the Musical in 2013.

Knight is on tour throughout May and June and will return to the Westend in the Bodyguard on 15 July 2016 for a limited six-month run. The album ‘Soulsville’ is out of the 10 th June. I dare you not to listen to it!