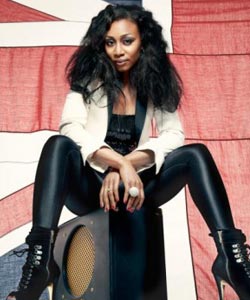 A George Michael classic, a Beverley Knight smash hit and a Seal dance anthem.Thats how Beverley Knight finished her triumphant concert at the Bridgewater Hall last night.
How many singers do you know who could attempt such a mix whilst adding to each track at the same time?

A packed audience was treated to some stunning singing, not only from Beverley hersel but also from her super trio of backing singers. She was also supported by a wonderful,versatile group of musicians.
The audience too played its part with all ages. colours and types,  turning the venue into one big dancefloor. No dancing in the isles though..Not allowed..

We were treated to several tracks from the most recent album SOUL UK which is highly recommended,  so close to Xmas.

As the happily exhausted crowd left the hall, one lady , of a certain age, was heard to describe Beverley as" our Whitney". On the strength of last nights performance no-one could disgree with that..

The tour continues across the country. Details at.