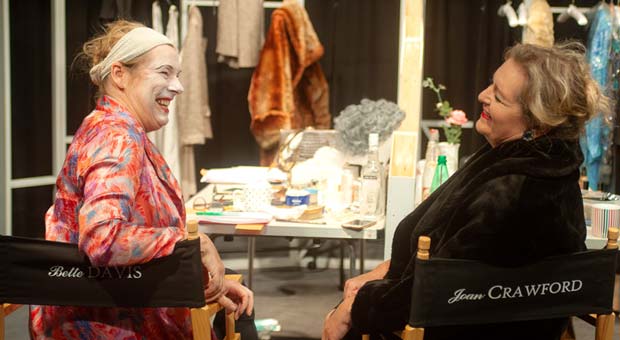 Female rivalry in showbiz has generated headlines for decades. Elizabeth Taylor vs. Debbie Reynolds; Britney Spears vs. Christina Aguilera; Taylor Swift vs. pretty much everybody…

But no feud has captured the imagination like that of movie stars Bette Davis and Joan Crawford. Their tortured relationship during the filming of “Whatever Happened to Baby Jane?” in 1962 was almost as bad as the one they portrayed on screen. Despite this, they needed each other to create a hit film in a youth obsessed industry that had all but thrown them on the scrap heap. But just how much of their mutual loathing was exploited to publicise the picture?

Their story was recently covered on TV but the play delves much deeper into what made these neurotic, demanding women so fearsome. Their insecurities are never far from the surface and this is in no small thanks to Julie Edwards and Kerry Willison-Parry playing the title roles with relish and aplomb.

It would be all too easy to go over the top with such larger than life characters but both actresses side step the obvious and give other layers to these faded stars unable to cope with a business that no longer saw them as relevant and public who had all but cast them aside.

Edwards’ portrayal of the oft imitated Davis featured the fire and anger we’ve come to expect from battling Bette but also her many vulnerabilities and deep frustration that her immense talent was often undervalued because she wasn’t a traditional beauty. In contrast, the model looks of Crawford meant she was never considered to be much of an actress. Willison-Parry gives a more sympathetic portrayal of the slightly unhinged Joan than we usually see but still perfectly conveyed that, behind the sweet smile, she’d still throw anyone under a bus to get what she wanted. Joan ;the brand; was also well drawn with Crawford’s constant habit of referring to herself in the third person.

Anton Burge’s script crackles with bitchy zingers flying between the two leads like exocet missiles but there are also many more telling, poignant moments when the make up cracks to reveal two women with more in common than they could ever admit. Sue Jenkins’ direction is taught and not a moment is wasted so the piece tears along at a great pace in a simple, effective set that allows both actresses to command our attention from the outset. Highly recommended.