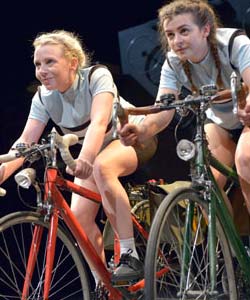 Beryl at The Lowry

There is a scene in Maxine Peake’s Beryl in which cyclist Beryl Burton and her husband Charlie arrive at a police station late at night in Cold War East Germany. They are travelling from one competition in London to another in Leipzig, but have missed the last train from Berlin and have been unable to find accommodation for the night. The officer they speak to is stern and taciturn… until Burton mentions her name. Suddenly gushing and effusive, the officer immediately arranges a free stay in a luxury hotel for the internationally famous “Yorkshire Hausfrau”

It is a stark contrast from Burton’s reception in her native country, where, despite a phenomenal array of trophies, awards and record-breaking achievements, she has been largely ignored outside the cycling press and regional newspapers in her native Yorkshire.

Burton’s story is an indictment, if ever there was one, of the second-class status Britain affords to sportswomen in general and female cyclists in particular. Credit is certainly due to Peake for penning a magnificent effort to redress this balance. And it certainly seems to be working, judging by the reception to this production so far.

Premiering at the West Yorkshire Playhouse in 2014, the play predictably rode in the slipstream of that county’s Tour de France mania. But this year’s touring production is so far proving equally popular, with three sell-out dates at The Lowry. The audience at the opening night seemed to be largely split between devotees of women’s cycling and fans of local treasure Peake – with no small crossover between the two.

There was plenty to delight both camps. Interesting historical facts about cycling (time trials, apparently, originated in the nineteenth century when the ruling classes objected to predominantly working class cyclists cluttering up the countryside – so the safest way for clubs to hold races was for competitors to set off at regular intervals rather than all together) are interspersed by witty, light-hearted banter between Burton, her devoted Charlie and chip-off-the-old-block daughter Denise. The four-strong cast, playing multiple characters each, all deliver animated, energetic performances.

But it is the sheer scale of Burton’s achievements which leaves the greatest impact on the audience. This is a woman who, in attempting to cycle the furthest distance in 12 hours, beat men’s champion Mike McNamara, who was himself in the process of setting a new men’s world record. This was the first time a women’s record had ever surpassed the men’s in any sport, and it was two years before a man edged ahead once again. The women’s record still stands today - eliciting Burton a round of applause mid-show from The Lowry audience.

Despite nearly 50 years of technological advancements which have made the fastest bikes today virtually unrecognisable from those of Burton’s era, one thing which no rider before or since has even come close to equalling has been her sheer grit and determination.

For more about The Lowry