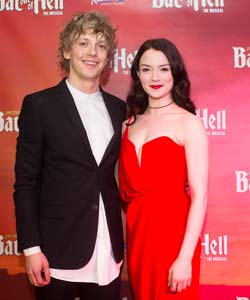 Bat out of Hell the Musical

Jim Steinman is a Rock, pop, Wagnerian rock and musical theatre maestro who sites his influences to include Richard Wagner, Phil Spector, Bruce Springsteen and The Who.

His ‘Bat Out of Hell’ was released in October 1977 and was the major-label debut by American rock singer Meat Loaf.  As well as being his first collaboration with composer Steinman and producer Todd Rundgren, It remains one of the best-selling albums of all time, having sold over 43 million copies worldwide.

So what happened at the Press night?

"As we all arrived at the majestic Manchester Opera House last evening, it was clear from the onset that some major theatrical event was in prospect. A line of immaculate Harley Davidson's greeted us on the Red carpet. These magnificent machines, together with expert fire-eaters, paparazzi and eager theatre goers all assembled for what turned out to be one of the city's finest ever press night events.

Unsurprisingly, by the time the packed audience settled into their seats we were already late starting. However, that allowed us to marvel at the spectacular set. Subterranean in style and multi-dimensional in structure, the set with its numerous screens, hardware and black and Red lighting invited us in to a futuristic world circa 2100.  The buzz in the theatre was almost physical to the touch.

By the time we were all comfortably seated, two shadowy characters had taken to the stage and we were off.

The storyline itself,  is quite ordinary with boy meets girl and falls in love. The parents object and daughter rebels against them; Familiar? Daughter then runs off with group of rebel friends, parents chase in hot pursuit to no avail and then, everyone comes round in the end. Oh and there is a death.

Basically, West Side Story meets Les Mis, meets Annie with echoes of the biblical story of Judas and elements of Grease all combined to good measure. Heard and seen it all before? Of course but who cares because every other facet of this remarkable theatre musical is a triumph and very original.

Right from the start, it was clear that we were in for a vocal treat. Indeed the next couple of hours demonstrated that the future of the British musical theatre genre is in very good hands .Excellent voices across all the leads and ensemble without exception That in itself is quite rare to find in most productions.

Having said above that the story was fairly predictable, the songs were definitely not.

The first act took us through the unravelling story with a combination of classic Steinman rock classics as well as some newer and lesser known songs.

'All revved up with no place to go', 'For crying out loud' and 'Bat Out of Hell' were stand outs with some wonderful vocals from Andrew Polec (Strat), Christina Bennington (Raven), Rob Fowler (Falco) (who’s vocal was very Jean Valjeanesque) and Sharon Sexton (Sloane).

Strong too are the performances of Danielle Steers (Zahara) and Dom Hartlet-Harris (Jagwire) who enjoy undoubted chemistry as the lovelorn couple which in one case is sadly unrequited.

Another star of the evening was the set, with its quirky angles, multi-screens and sliding screens, all combining to provide a visual feast. Indeed the use of hand held camera work projected across the set and adjacent TV screens became an allegory for modern living itself, aka The Kardashians.

And then there is the business with the car. Can’t tell, sorry. You’ll have to go and see it for yourself. Suffice to say, it’s a memorable theatrical moment. Think Helicopter in Miss Saigon.

By the time we are into the second half, Steinman’s soaring arrangements, beautiful melodies and 'curious' lyrics are firmly stamped in our hearts and minds all consistently delivered by a stunning cast. Highlights include the 11 o'clock number 'Objects in the rear view mirror may appear closer than they are', the sexually charged duet by Falco and Sloane 'Paradise by the dashboard light' and yet another classic 'Two out of Three ain't bad'.

'It’s all coming back to me', 'I'd do anything for love (but I won’t do that)' and a rip roaring reprise of 'Bat out of Hell' raise the entire house to its feet and there they stay..

We even had a pair of bats that flew across the Auditorium just to make us all smile.

Is this a special production? You bet it is. And with a strictly limited run before its transfer to London, if you want to share in this great success then you had better hurry.

Special praise too the team at ATG theatres and partners. who made this all work so very well on the night.

To experience this highly memorable production. BOOK NOW IF YOU CAN.