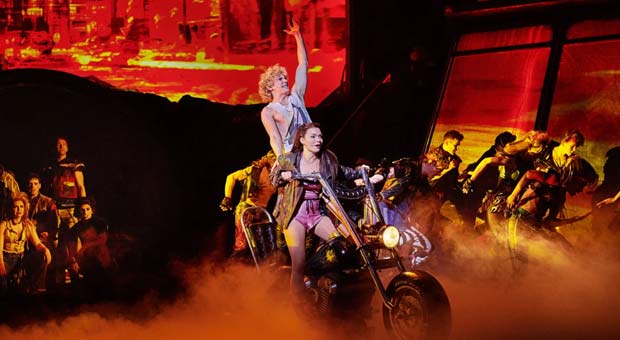 Bat out of Hell returns to Manchester Opera House

Jim Steinman lyrics are often a powerful force of a musical, but with amazing choruses, exceptional actors and a fairytale plot, built for a truly unabashed, reengineered piece of incredible theatre. Back in its home of Manchester Opera House that knows exactly what it wants to be.

The evening started with a roar of Harley Davison’s tearing down quay street to start the blood pumping. Even before the performance, you are elude into high sexual tension from a performance, of the cast preparing the Harley Davison. As the story progresses we are introduced to the characters through truly powerful ballads and fragments of Neverland by Jim Steinman with the Lost Tribe being 18 and never growing old as well the character Tink how to sit between life and death throughout the performance and also rings the bell which adds to the fairy tale story.

The main characters are introduced by carefully choreograph music numbers and hilarious comedy sections that show the impressive fairytale love of Strat (played by Glenn Adamson) and Raven (played by Martha Kirby) and the older strained happy ever after couple of Raven parents Falco the main protagonist (played by Rob Fowler) and the sexuality bending character Sloane (played by Sharon Sexton).

For a modern interpretation of a classic fairy tale, put to the incredible music of meatloaf with the fire of modern theatre and high sexual tension its a must-see in Manchester.